US President Donald Trump has vowed to defeat the "radical left" in an Independence Day speech at the White House, condemning recent efforts to remove or rethink monuments to historical figures as attempts to destroy the United States. 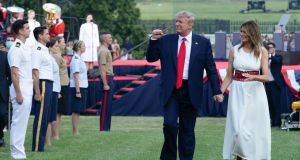 Donald Trump celebrated America’s Independence Day weekend by stoking divisions over a perceived culture war and dismissing the two most immediate threats to his presidency: a massive resurgence of the coronavirus pandemic and a growing racial justice movement seeking an end to police violence across the nation.

In speeches at historically symbolic venues to mark the 244th birthday of the United States, the president condemned the “Marxists, anarchists, agitators and looters” he insists want to “tear down our statues, erase our history, indoctrinate our children [and] trample on our freedoms”.

“Their goal is not a better America, their goal is the end of America,” Mr Trump told supporters at Mount Rushmore , the national monument in South Dakota where the giant faces of four revered presidents are carved into the rock.

He repeated the claim at a Fourth of July appearance at the White House, adding that he believed the Covid-19 pandemic, which has infected 2.8 million Americans and killed almost 130,000, is “99 per cent harmless” .

On Sunday, Mr Trump spent what was by one count the 366th day of his presidency at one of his own private properties, and the 274th playing golf. But away from the greens his messaging echoed the discordant rhetoric of his 2017 inaugural address , in which he spoke of “American carnage” and a nation riven by destruction and decay.

Yet with coronavirus numbers soaring – Florida, Texas and Arizona all reported weekend spikes – protests continuing nationwide against the death of George Floyd and other African-Americans at the hands of police, and Mr Trump trailing Joe Biden, the presumptive Democratic candidate in November’s election, in opinion polls, he appears to be losing touch with the direction of the nation.

Some key aides refused to defend Mr Trump on Sunday, as analysts saw evidence of a growing backlash.

“I’m not going to get into who is right and who is wrong,” Stephen Hahn, the commissioner of the federal Food and Drug Administration, said in an awkward appearance on CNN’s State of the Union, when asked about Mr Trump’s “coronavirus is 99 per cent harmless” claim.

“What I am going to say is it’s a serious problem that we have. Cases are surging in this country, we have all seen the graphs associated with that.”

Earlier this week, with infections rising in 40 states and many governors, Republican and Democratic, reversing course on reopening, Mr Trump was still insisting that the virus was “ going to sort of just disappear ”.

Others blasted as “mean-spirited” Mr Trump’s Mount Rushmore speech, in which he claimed that attempts by protesters to topple Confederate-era statues and rename military bases were part of a “merciless campaign to wipe out our history [and] defame our heroes”.

“It will be seen by history as a desultory exclamation point to the past, as America begins a new, brighter and more just paragraph in our national narrative,” Dan Rather, a respected journalist, said in a tweet .

There were further suggestions on Sunday that some leading Republicans, fearing for their own fortunes in November, are breaking with the president as his popularity ratings continue to plummet.

“There are so many peaceful protests out there, I support those peaceful protesters,” Joni Ernst, senator for Iowa and vice-chair of the Senate Republican Conference, told CNN.

Ms Ernst, one of the 52 Republicans who voted to acquit Mr Trump at his impeachment trial, is facing a tough battle in Iowa, a swing state as Mr Trump seeks a second term. She narrowly trails Democratic challenger Theresa Greenfield in the most recent RealClearPolitics polling .

Mr Trump also faces more pressure over his dismissive response to the coronavirus pandemic and refusal to wear a mask in public.

“We’ve made a lot of progress,” Mr Trump said in his White House address. “Our strategy is moving along well. It goes out in one area, it rears back its ugly face in another area. But we’ve learned a lot. We’ve learned how to put out the flame.”

Phil Murphy, the Democratic governor of New Jersey, a state with 175,000 cases and more than 13,000 deaths, called for Mr Trump to implement a national requirement for citizens to wear a mask.

“It’s become almost not even debatable,” he told NBC’s Meet the Press. “If you’re leaving your house, put on a mask. I think it ought to be a national requirement.”

Mr Trump has insisted the US has recorded a rise in Covid-19 cases because of increased testing, even calling for a slowdown in testing because the figures “make us look bad”.

“Now we have tested almost 40m people,” he said on Saturday. “By so doing, we show cases, 99 per cent of which are totally harmless. Results that no other country can show because no other country has the testing that we have, not in terms of the numbers or in terms of quality.”

“He’s wrong in the fact that testing leads to more cases,” she told NBC. “I think that we are not testing enough.