US president Donald Trump has refused to commit to a peaceful transfer of power should he lose the upcoming election to Democratic nominee Joe Biden. Video: Reuters 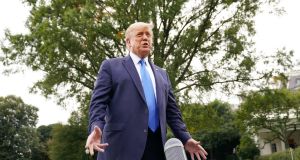 US president Donald Trump speaks to the press as he leaves Washington for a campaign event in North Carolina. Photograph: Mandel Ngan/AFP via Getty

Republican leaders sought to assure Americans that an orderly transition would take place after November’s election, following president Donald Trump’s refusal to commit to a peaceful transfer of power.

Mr Trump – who has persistently questioned the validity of mail-in voting amid an expected rise in the numbers voting by mail in November – was asked if he would commit to a peaceful transferral of power if he loses to Joe Biden. “Well, we’re going to have to see what happens,” he said during a press conference, as he questioned the integrity of postal ballots.

“I’ve been complaining very strongly about the ballots … Get rid of the ballots, and you’re have a very peaceful,” he said, trailing off. “There won’t be a transfer, there’ll be a continuation. The ballots are out of control.”

Mr Trump doubled-down on his comments on Thursday as he left Washington for a campaign event in North Carolina.

“We want to make sure the election is honest and I’m not sure that it can be,” he said, claiming that ballots had been found in garbage cans and a river. “They throw them out if they have the name Trump on it,” he said, apparently referring to unverified reports that postal votes sent by members of the military were located in a river in Pennsylvania.

Mr Trump’s defiance on the issue came as senior Republicans sought to distance themselves from Mr Trump’s comments. “The winner of the November 3rd election will be inaugurated on January 20th,” Senate majority leader Mitch McConnell wrote on Twitter. “There will be an orderly transition just as there has been every four years since 1792,” a reference to the year when George Washington was elected for a second term.

Mr Trump also said he was close to a decision on a Supreme Court replacement for the late Justice Ruth Bader Ginsburg, and would confirm the announcement on Saturday. “Saturday afternoon, five o’clock, is going to be a very important day in the history of our country,” he said. Mr Trump has argued that the court vacancy must be filled before the election in case the court must weigh in on the election results.

Earlier he was met with boos and chants of “vote him out” from the public as he paid his respects to Ms Ginsburg at the Supreme Court with his wife, Melania.