US president Donald Trump has posted a video to social media after returning to the White House following his hospitalisation for coronavirus treatment. Video: Reuters/Donald Trump 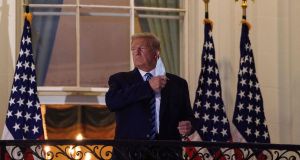 US president Donald Trump takes off his face mask after arriving at the White House on Monday night. Photograph: Nicholas Kamm/AFP via Getty Images

US president Donald Trump continued to minimise his Covid-19 infection on Tuesday, insisting he would partake in next week’s presidential debate despite receiving continuing treatment.

In an update on Tuesday, White House physician Sean Conley said that Mr Trump had had a “restful first night at home”, and was showing no symptoms. He said the president’s vital signs remain “stable”, and he continued to do “extremely well”.

Following a dramatic return to the White House aboard Marine One on Monday night – edited clips of which he posted as a video montage set to music on his Twitter feed – Mr Trump urged Americans not to be “afraid” of coronavirus.

“Don’t let it dominate, don’t let it take over your lives. Don’t let that happen. We’re the greatest country in the world. We’re going back, we’re going back to work, we’re going to be out front. As your leader, I had to do that. I know there’s danger to it,” he declared in a video recorded after his return, adding: “Maybe I’m immune, I don’t know.”

He said that, as a leader, he had “stood out front, I led. Nobody who is leader would not do what I did. I know there’s a risk, there’s a danger, but that’s okay. Now I’m better.”

In a defiant gesture, after disembarking the presidential helicopter he walked up to the Truman balcony, removed his face mask and saluted. He then walked into the White House without wearing his mask.

Mr Trump, who spent three nights in Walter Reed medical center, is continuing to be treated with a variety of drugs, after testing positive for coronavirus last week, leading to his hospitalisation. Close to 210,000 Americans have died from Covid-19, while more than 7 million have been infected.

He returned to the White House despite his medical team warning that he was not “out of the woods”.

Mr Trump indicated on Twitter that he intends to debate his presidential rival Joe Biden in the second scheduled event in Miami next Thursday, despite the fact that he could still be infectious.

“I am looking forward to the debate on the evening of Thursday, October 15th in Miami. It will be great!,” he tweeted. “FEELING GREAT!” he wrote on Twitter separately.

Meanwhile, the web of senior executives impacted by the coronavirus outbreak at the White House continued to grow, with senior officials at the Pentagon, including chairman of the joint chiefs of staff Mark Milley, confirming that they are self-quarantining following exposure to someone with the virus.

First lady Melania Trump, press secretary Kayleigh McEnany, and former presidential counsellor Kellyanne Conway are among those who have contracted Covid-19 in the past week.

Mr Trump, who sent dozens of tweets on Tuesday from the White House, also announced on Twitter that he was cutting off negotiations with Democrats on Capitol Hill about a new coronavirus stimulus plan, an announcement that sent stock markets sharply lower.

He said he had instructed Senate majority leader Mitch McConnell to instead focus on confirming Ms Coney Barrett, and to “stop negotiating until after the election when, immediately after I win, we will pass a major Stimulus Bill that focuses on hardworking Americans and Small Business”.

House speaker Nancy Pelosi had been negotiating with treasury secretary Steve Mnuchin for the past few weeks on a new coronavirus package, expressing optimism on Friday that a deal was within reach.

Mr Trump accused Ms Pelosi of demanding “$2.4 Trillion Dollars to bailout poorly run, high crime, Democrat States, money that is in no way related to COVID-19. We made a very generous offer of $1.6 Trillion Dollars and, as usual, she is not negotiating in good faith,” he tweeted.

Earlier in the day, he erroneously compared coronavirus to the seasonal flu, tweeting that more than 100,000 people die from flu each year. “Are we going to close down our Country? No, we have learnt to live with it, just like we are learning to live with Covid, in most populations far less lethal!!”