Trump says ‘something should happen’ after poison gas attack in Syria 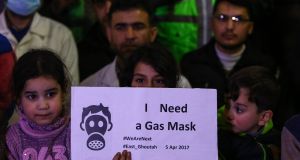 Syrian children, alongside first aiders and civil defense volunteers, at a gathering to show solidarity with the victims in Douma, Syria. Photograph: Mohammed Badra/EPA 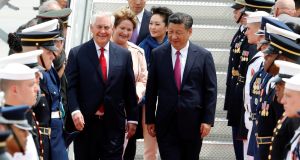 US president Donald Trump said on Thursday that “something should happen” with president Bashar al-Assad after a poison gas attack in Syria, as the Pentagon and the White House launched detailed discussions on military options.

While Mr Trump stopped short of calling on Mr Assad to leave office, the comments were his strongest suggestion yet that the United States may be edging toward a stronger stance against Mr Assad, whose country has been torn apart by six years of civil war.

“I think what Assad did is terrible,” Mr Trump told reporters travelling with him on Air Force One. “I think what happened in Syria is a disgrace to humanity and he’s there, and I guess he’s running things, so something should happen.”

The poison gas attack on Tuesday in the rebel-held Syrian town of Khan Sheikhoun killed at least 70 people, many of them children, and presented Mr Trump with his biggest foreign policy crisis since he took office in January.

Washington has blamed the attack on the Syrian government.

A US official said options being discussed by the Pentagon and White House could include grounding aircraft used by Assad’s forces, the official added, speaking on condition of anonymity.

Such options would also include use of cruise missiles – allowing the United States to strike targets without putting piloted aircraft in the skies above Syria.

Striking Mr Assad would put the United States at odds with Russia, the Syrian government’s staunch ally, which intervened on his side in September 2015, turning the tide of the conflict in his favour.

The official added that US Defence Secretary Jim Mattis and White House national security adviser HR McMaster had already been in talks on the matter.

Mr Mattis will presumably discuss the options when he meets with Mr Trump at his Mar-a-Lago retreat in Florida, the official said. Mr Mattis is due in Florida later on Thursday as part of a scheduled trip.

Mr Trump and Chinese president Xi Jinping landed in Florida on Thursday for a face-to-face meeting where Mr Trump will face pressure to deliver trade concessions and prevent a crisis with North Korea from spiralling out of control.

The leaders of the world’s two biggest economies are to greet each other at the president’s Mar-a-Lago retreat and dine together with their wives, kicking off a summit that will conclude with a working lunch on Friday.

“We have been treated unfairly and have made terrible trade deals with China for many, many years. That’s one of the things we are going to be talking about,” Mr Trump said on Thursday.

Mr Trump promised during the 2016 campaign to stop what he called the theft of American jobs by China and rebuild the country’s manufacturing base. Many blue-collar workers helped propel him to his unexpected election victory on November 8th and Mr Trump wants to deliver for them.

The summit will bring together two leaders who could not seem more different: the often stormy Mr Trump, prone to angry tweets, and Mr Xi, outwardly calm, measured and tightly scripted, with no known social media presence.

What worries the protocol-conscious Chinese more than policy clashes is the risk that the unpredictable Mr Trump could publicly embarrass Mr Xi, after several foreign leaders experienced awkward moments with the new US president.

“Ensuring President Xi does not lose face is a top priority for China,” a Chinese official said.

The most urgent problem facing Mr Trump and Mr Xi is how to persuade nuclear-armed North Korea to halt unpredictable behaviour like missile test launches that have heightened tensions in South Korea and Japan.

North Korea is working to develop an intercontinental ballistic missile capable of hitting the United States.

The White House has said North Korea was a test for the US-China relationship, and Mr Trump has threatened to use trade to try to force China to exert influence over Pyongyang.

Mr Trump said on Thursday he would be ready to act unilaterally to address North Korea’s nuclear program if China does not step up to help with the matter. “Certainly I would be,” Trump told reporters when asked whether he would be willing act alone on North Korea. “But I think China will want to be stepping up.”

Meanwhile, Twitter Inc said in a lawsuit on Thursday that it had received a demand from US officials for records that could reveal the user behind an account opposed to president Donald Trump and that it was challenging the demand in court.

The lawsuit over the account @ALT_uscis, claimed to be run by federal immigration employees, was filed in federal court in San Francisco, where Twitter is based.

Following Trump’s inauguration in January, anonymous Twitter feeds voicing concerns at more than a dozen US government agencies appeared to challenge the president’s views on climate change and other issues.

“The rights of free speech afforded Twitter’s users and Twitter itself under the First Amendment of the US Constitution include a right to disseminate such anonymous or pseudonymous political speech,” Twitter said in the lawsuit.

The US Department of Homeland Security, which is a defendant in the lawsuit, declined to comment on pending litigation.