Sub-Saharans shun Europe to put down roots in Morocco 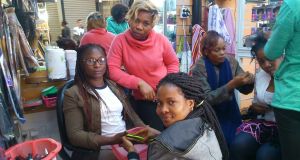 Suzanne Niamke (left) at work in her busy beauty salon. 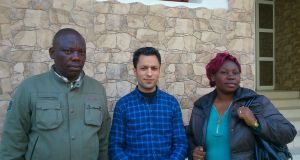 Mohamed Mboyo, a refugee; Hassan Errifai of Amappe, an association for small businesses; and Rebecca Bousouka, a migrant. 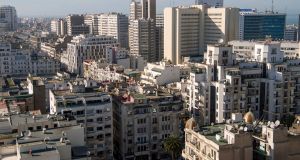 It’s 10am in Casablanca’s bustling central souk and Suzanne Niamke is opening up her beauty salon. It’s one of several dozen small businesses here that make up a section of the bazaar called the Senegalese Market, a group of shops, services and restaurants run by people not just from Senegal but from all over sub-Saharan Africa.

Niamke, who is from Ivory Coast, says business is good. “[Sub-Saharan] Africans come, Moroccans come, even French come,” she says of her customers. “Life is good here,” she adds. “I prefer it to Europe.”

Niamke is one of an increasing number of migrants from sub-Saharan Africa who are shunning the lure of Europe to stay and work in Morocco. Once merely a stepping stone for those desperately chasing their European dream, the north African country has now become the destination of choice for many migrants.

The Moroccan government has implemented two legalisation programmes, in 2014 and again last year, encouraging sub-Saharans to apply for residency papers. The most recent initiative saw nearly 20,000 migrants apply. Niamke, who has been in Morocco for three years and now has legal status, is one of those who has benefited.

“They’ve given us a present, they’ve given us papers and that’s good,” she says, comparing Morocco favourably to countries such as France, where she says it is more difficult to gain legal status and where racism is rife.

Niamke knows many people from her country who have tried to reach Europe. “They crossed the sea – they took their decision,” she says. “But I don’t want to die in the water.”

Her Cameroonian husband, Richard Wenong, an electrician who came to Morocco 10 years ago, has a similar view. He is horrified by the stories he hears of acquaintances who have attempted to reach Europe – many of them by boat or attempting to scale the border fences between Morocco and the Spanish cities of Ceuta and Melilla, which are both in North Africa.

He adds: “Morocco is a good opportunity because I can do what I want, I am free here, I can work. All the money I have is from Morocco.”

He has been subjected to racism here, but he is philosophical about it.

“Not all Moroccans are good,” he says. “Some treat us well, some don’t. [But] everywhere in the world there are racists – even in Cameroon. So some people are good and some are not good.”

“The regularisation of thousands of Sub-Saharan African migrants in Morocco is a very good thing and it’s also diplomatically beneficial to Morocco,” he says.

Monjib says that Morocco sees the policy as a way of gaining the political support of sub-Saharan countries, particularly with regard to the thorny issue of western Sahara. Morocco has laid claim to the 266,000sq km territory since 1975, despite the resistance of the Polisario Front liberation movement and the tendency of the international community to see the area as a separate nation.

Morocco, which has a parliamentary system overseen by King Mohammed VI, also appears determined to use the migration issue as leverage over Western Sahara in other, more aggressive, ways. A recent European Court of Justice ruling on an agricultural deal angered Rabat by treating the disputed territory as independent from Morocco.

A few weeks later, unusually large numbers of migrants started reaching Ceuta from Morocco, with some Spanish police reporting that their Moroccan counterparts had appeared to drop their guard deliberately. Many observers saw the sudden influx as a Moroccan reprisal against Europe.

“You have a part of the population saying that the king is doing more for foreigners and for sub-Saharan countries than for Moroccans themselves,” Monjib says. “But most Moroccans aren’t bothered.”

As well as benefiting from official-resident status, some sub-Saharans are also receiving direct professional backing. In Rabat, the Moroccan Association for the Support of the Promotion of Small Businesses (or Amappe) is funding, training and advising self-employed migrants, including many sub-Saharans.

Mohamed Mboyo is a 55-year-old journalist from the Democratic Republic of Congo who fled his country in 2013 after suffering political persecution, including a spell in jail. After claiming asylum in Rabat, he is now working as a freelance journalist, reporting for various French-speaking media and hosting his own radio programme.

“Amappe granted me financial support, they bought for me a computer – an important tool for a journalist,” he says. “When I arrived here I had nothing and I benefited from this project. When you are not in your own country it’s very important to have support.”

The cultural challenges for foreigners such as Mboyo are substantial, such as the Arabic language, new customs and occasional prejudice. But Hassan Errifai, who works for Amappe, believes the project reflects the changing relationship between Morocco and the countries to its south.

“Morocco has become a host country and not just a transit country,” he says. “Immigrants consider themselves at home here and not in another country, and this has given the migrant or the refugee the feeling of belonging to a place whose culture they share as well.”