Congressman was criticised over handling of inquiry into US election interference 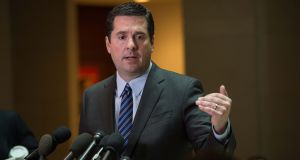 US Representative from California Devin Nunes, chairman of the House Intelligence Committee, who anounced on Thursday that he is stepping down from the Russia probe. Photograph: Nicholas Kamm/AFP/Getty Images

Devin Nunes, the embattled California Republican who is chairman of the House Intelligence Committee, announced on Thursday he would step aside from leading his committee’s investigation into Russia’s efforts to disrupt last year’s presidential election.

The congressman has been under growing criticism for his handling of the Russian inquiry. Many on Capitol Hill have said he is too eager to do the White House’s bidding and cannot be an impartial investigator into questions about any role President Donald Trump’s associates may have had in last year’s Russian campaign to disrupt the election.

Mr Nunes said that his decision came after “left-wing activist groups” filed accusations against him with the Office of Congressional Ethics. He called the charges “entirely false and politically motivated”, but said it was in the committee’s best interests for him to temporarily step aside from the investigation.

Last month, he gave a news conference saying that he had obtained new information that the Obama administration had conducted improper surveillance of the Trump campaign during the election, and raced to the White House to brief Trump. It was later revealed that Mr Nunes had received the information from White House officials.