EU establishment awaits Emmanuel Macron victory as if for the Messiah 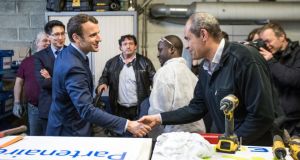 The centrist candidate Emmanuel Macron will defeat the leader of the extreme right-wing Front National, Marine Le Pen, in the second round of the French presidential election on May 7th, by 61 to 39 per cent, an opinion poll published by Le Monde this week predicts.

Brussels and pro-EU circles await a Macron victory as if for the Messiah. Ever since French and Dutch voters defeated referendums on the European constitutional treaty, in 2005, politicians have tempered pro-Europe declarations. Macron is France’s first unabashed European integrationist in more than a decade.

“We have to stop acting as if we’re ashamed to build Europe,” Sylvie Goulard, a centrist MEP and Macron’s adviser on European affairs, says.

Le Pen “is our principal adversary, and the main debate is between her and me”, Macron told Le Monde. “She wants us to close up, turn inward. I defend openness.”

Le Pen is gambling that the French so dislike the EU that they will elect her to dig its grave. But her determination to abandon the euro could prove Le Pen’s undoing. Nearly three-quarters of respondents to a poll published by Le Figaro on March 26th said they do not want to return to the franc.

Passages of Macron’s manifesto, Révolution, could almost have been written by Le Pen. He castigates the “exhaustion of ideas and methods” of “an entire system that is giving up the ghost and going in circles”.

Macron says the intergovernmental rule perpetuated by European Union heads of state and government is dead. “The summits have become a caricature,” he writes. “They meet behind closed doors, repeat broad principles, change a word in a declaration so as not to repeat what was said at the previous summit . . .”

A possible future minister for European affairs, Goulard says Macron wants to get away from the EU’s past obsession with structures and institutions.

Yet in his speech at Humboldt University in Berlin, Macron’s most detailed explanation of his European policy so far, he proposed half a dozen structures and institutions. If he is elected he will wait until the German election, in September, then launch “democratic conventions” across the EU for up to 10 months. They would culminate with a “roadmap for Europe” of “10 to 15 pages, where we define a clear list of actions . . . in terms of defence, security, fiscal convergence . . .”

Macron wants an EU digital agency to regulate a single digital market. He proposes an annual conference bringing together the EU and countries from which migrants originate and transit. He would mobilise at least 5,000 men and women in Frontex, the recently created European border and coastguard agency.

Macron would also create an EU defence headquarters, security council and intelligence agency. He wants the euro zone to name a finance minister and draw up a budget.

Like Le Pen, Macron says the strong euro has helped Germany and hurt France. But, rather than abandon the euro, he says France should take more responsibility, in the form of structural reforms in the labour market, professional training and education. And he wants Germany to show more solidarity by financing greater EU investment in, for example, energy and technology.

German leaders clearly favour Macron over Le Pen. Angela Merkel’s spokesman said in January that the chancellor was ready to receive all French presidential candidates who ask to meet her, except Le Pen.

Macron called on Merkel in Berlin on March 16th. After their meeting he said they had found “many areas of convergence” and discussed the need for “enhanced co-operation” among certain EU countries.

Le Pen blames Martin Schulz, the former president of the European Parliament and the socialist candidate who will challenge Merkel in the September election, for “judiciary persecution” in a scandal over her use of EU funds to pay Front National workers. Alluding to Germany’s Nazi past, Schulz says, “We all know where [the Front National’s] ideas have led our country and our continent.”

The possibility that Macron and Schulz could end up leading France and Germany has led to fantasies of a revival of the ideal of a “social Europe”, in which the economies and welfare systems of member states would converge.

But Goulard points out that, historically, the greatest periods of Franco-German co-operation occurred when leaders from different political backgrounds were in power: under the conservative president Valéry Giscard d’Estaing and the socialist chancellor Helmut Schmidt, and during the rule of the socialist François Mitterrand and the Christian democrat Helmut Kohl.

“It’s not up to Emmanuel Macron to choose,” Goulard says. “The Franco-German relationship is above parties.”

Without the critical mass of 27 EU member states, Macron argues, no individual country has the degree of sovereignty required to defend its interests in trade deals with China and the United States, or in the battles against climate change, illegal immigration and terrorism.

Le Pen says the EU has robbed France of its sovereignty. Macron says sovereignty must be transferred to Europe. He wants “more sovereignty, but more European sovereignty”, he told the audience at Humboldt University. “Our main mistake was to leave this word to those who promote a nationalistic approach . . . Because sovereignty means the capacity of acting in concrete terms to protect ourselves and defend our values.”