Alcohol ban more than bump in the road for Indian retailers 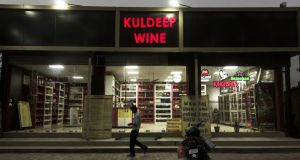 A man walks past a roadside liquor store located along a highway at dusk in Gurgaon, Haryana. Photograph: Udit Kulshrestha/Bloomberg via Getty

Provincial governments across India are considering innovative solutions to circumvent a recent supreme court ruling that led to the shutdown of thousands of bars and alcohol shops across the country.

Last month, the court ordered the closure of all such establishments located 500m from a national or state highway in order to reduce drink-driving, which claims thousands of lives each year.

More than 150,000 people died in road incidents in India in 2016, of which a large number were victims of drink-driving.

The court ruling followed a public interest petition by a 48-year-old man who was left disabled after a car accident.

The closure of alcohol outlets in all 29 Indian states and seven federally administered territories had made more than 1.5 million people jobless, and would hit business revenues by more than 2 trillion rupees (€2.87 billion) in the upcoming financial year.

The ban also dealt a major blow to the tourist industry, especially in holiday destinations such as Goa on the southwest coast, where more than 3,000 bars and alcohol shops had shut down.

“It [the ban] is a hugely regressive step, as life across most of urban India is centred on highways,” said Abhay Jagat, a leading restaurateur in Chandigarh, a city 250km north of New Delhi renowned for its bars.

Many provinces plan on “de-notifying” or downgrading state highways to “major district roads” so that alcohol shops and bars along them can reopen.

But this does not come without possible financial penalties: their de-notification could precipitate a sharp drop, or even withdrawal, of federal funds for their upkeep.

Another route being explored by some states to bypass the supreme court ruling is to amend laws that change the definition of alcohol.

Southern Kerala state, for instance, is considering changing its Abkari Act, which controls alcohol consumption, by declaring that neither wine nor beer are alcohol, and hence not subject to the court ruling.

Similar legal amendments are under review by other states that would permit the sale of “mild liquor”, thereby maintaining jobs and ensuring some measure of revenue.

Indian provinces have authority over making laws on local matters that do not need federal ratification.

“It’s a critical time for the liquor and hospitality industry,” said Adarsh Shetty of the Indian Hotels and Restaurants Association.

In western Maharashtra state, of which Mumbai is the capital, 12,000 hotels and bars had closed down, making tens of thousands of people jobless, Mr Shetty said. Many who had taken loans to run bars now faced bankruptcy, he added.

Some hotels and bars, however, had adopted creative ploys to get around the ban, by shifting their entrances to the rear, thereby increasing the “motor-able” distance from state or national highways. A handful qualified, with a few metres to spare.