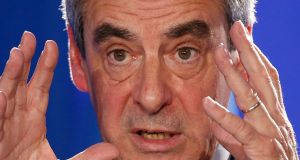 Presidential candidate Francois Fillon in Paris on Thursday: “Unless France puts order in its accounts, unless it liberates its economy, neither Franco-German entente nor the re-foundation of Europe is possible,” he said. Photograph: Charles Platiau/Reuters

Francois Fillon, the presidential nominee for the conservative party Les Républicains, presented his plan for Europe at a press conference on Thursday.

“France is going to determine the fate of our continent in this election,” he said, predicting “chaos and the explosion of Europe” if Marine Le Pen, the candidate of the anti-EU, extreme right-wing Front National (FN), wins the May 7th election.

Opinion polls show that Mr Fillon will come in third in the first round on April 23rd. But he is gaining ground, while Ms Le Pen and the centrist Emmanuel Macron, the front-runners, seem to be losing momentum.

Mr Fillon and Mr Macron are the most pro-European candidates. The main difference between them is that Mr Macron dreams of a more integrated, federal Europe and says that intergovernmental Europe “is dead”. Mr Fillon believes in a continuation of “the Europe of nations, the Europe of heads of state”.

Both candidates want to revive the “Franco-German engine” which Mr Fillon says broke down under President Francois Hollande. In Paris, the idea that French military power counter-balances German economic might is taking hold. As the late president Francois Mitterrand said in 1988, “We have the bomb; the Germans the deutsche mark.”

Both candidates believe France must undergo profound economic reforms. “Unless France puts order in its accounts, unless it liberates its economy, neither Franco-German entente nor the re-foundation of Europe is possible,” Mr Fillon said.

When Mr Macron visited Angela Merkel in Berlin last month, Mr Fillon implied that the chancellor favours him, saying “I know which side her heart is on.”

Mr Fillon and Mr Macron have both said that the EU “is going in circles”, and both call for an “economic government” of the euro zone that would include “fiscal convergence”.

By focusing too long on successive enlargements, Europe lost sight of “interior challenges,” Mr Fillon said. “Limitless enlargement is over! . . . Turkey has no vocation to enter the EU.”

“I have the dates, the days, the people who provided the documents. When the time comes, I will pursue them,” Mr Fillon threatened on France Inter radio.

Mr Fillon said he slept badly in recent weeks, “But those who started this affair will not sleep well in the future.”

In a poll published on April 5th, 65 per cent of respondents said that “honesty and probity” were the most important qualities for the next French president. The percentage rose to 86 per cent for supporters of the socialist candidate Benoit Hamon, but dropped to 19 per cent for Mr Fillon’s supporters.

On April 3rd, Mr Fillon told BMFTV that he finds it difficult “personally” to save money. A former prime minister, Mr Fillon and his wife Penelope have received an average of more than €30,000 monthly in salaries for the past five years. His programme demands sacrifices of the French population.