Trump era may mark the last gasp of the religious right

Janan Ganesh: Evangelicals face a bleaker future despite their bargain with president

US president Donald Trump calls Bob Woodward's new tell-all book a "work of fiction" and says he did not discuss the assassination of the Syrian leader Bashar al-Assad. Video: Reuters 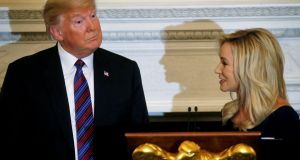 US president Donald Trump reacts as pastor Paula White tells him she has a bible to give him at a dinner hosted for evangelical leaders at the White House in Washington, DC. Photograph: Leah Millis/Reuters

Donald Trump’s leaked remarks to evangelical leaders last month contained a telling choice of possessive pronoun: “I just ask you to go out and make sure all of your people vote.” Another Republican president might have referred to “our people”. This one does not feign membership of the flock. He tables an earthly bargain: it is me, or a Democrat; Brett Kavanaugh or a liberal justice on the US supreme court.

The Senate’s probable confirmation of Kavanaugh, a more bankable conservative than the retiring Anthony Kennedy, will be read outside the US as another coup for the Christian right in the West’s most pious nation. Trump’s impertinence – he also teased the gathered faithful that they had “plateaued” – suggests something else. The religious influence on American conservatism is on the gentle wane.

White evangelical Protestants are a declining share of the population. There are Latino and Asian Christians to replace them, but their politics are too varied to herd into a right-wing pen. Public opinion on same-sex marriage has softened at speed. Millennials, poised to become America’s largest living generation, are as liberal as their reputation. Extrapolate from these trends, and the geopolitical drift of the US from Europe masks an underlying convergence of the cultures.

A coherent and organised force can hold out against headwinds. The question is whether evangelicals are either. They were never a monolith, hence the rifts over subjects as momentous as slavery and as tactical as the alliance with the Republican Party a century later. Charismatic leadership and a siege mentality after the permissiveness of the 1960s held an otherwise tenuous coalition together.

With Billy Graham, who died in February, went perhaps the last of its great leaders. Whether it can speak as one has not been in such doubt since the mid-20th-century dawn of the modern movement. What Charles de Gaulle said about France and its cheeses is true of America and its denominations: the myriad range suggests ungovernability.

In her work on evangelicals, the historian Frances FitzGerald sees a trend to fragmentation. “New evangelicals” are taking un-Republican positions on healthcare, the environment and criminal justice. This is partly a sop to millennials, partly sincere exegesis: a reading of scripture that prizes social and economic fairness as highly as the “below the belt” questions of yore. Still others are withdrawing from partisan politics altogether, having little to show for it.

If a politically nuanced evangelical movement is hard to picture, remember that Kavanaugh’s Catholicism would have barred him in some eyes two generations ago. He is now an uncontroversial nominee. Faith can be more protean than its name suggests.

If the religious right does not change in ways that curb its influence, the Republicans might. By winning Pennsylvania, Ohio, Michigan, Wisconsin and Iowa from the Democrats in 2016, Trump eased the GOP’s dependence on that evangelical fortress: the south. There are religious conservatives in the midwest, of course, but the president tends to answer their economic grievances rather than their doctrinal qualms with the modern world.

Trump won a larger share of white evangelicals than George W Bush in 2004 or Mitt Romney in 2012, both of whom were, to put it at its least, more obviously men of the book. The difference is that he was never defined by his religious appeal. He could unlock deindustrialised states with economic populism. It was his lack of reliance on evangelical leaders that freed him to speak in such brusque and transactional terms last month, even likening them to flatlining stocks.

Perhaps Trump is a one-off. If not, and future Republicans emulate his electoral model, it implies a Church that has to vie for the party’s favour and not the other way around.

For decades, religious capture of public life has been liberal Europe’s idée fixe about the US. The prejudice is corroborated by the dearth of open atheists in Congress and the elision of God and nation in political discourse. But material influence on government is not quite the same thing. On that score, it is possible that we lived through the peak of evangelical power some time ago.

This judgment will date badly if there is a Great Awakening of the kind that saw American religiosity surge in each of the past three centuries – or just a more conventional Republican president. Secularism is not a teleological given. For now, however, there is an elegiac mood on the religious right, as if the confirmation of a supreme court judge is, if not the last hurrah, then insurance against a bleaker future. – Copyright The Financial Times Limited 2018