Saudi Arabia threatens to respond to any punitive measures 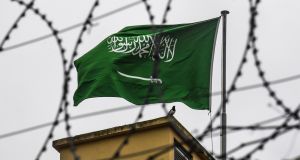 Saudi Arabia has threatened to use it economic muscle to respond to any punitive measures taken against the kingdom in the wake of the disappearance of a prominent journalist.

In a statement released a day after US president Donald Trump warned that Saudi Arabia would face “severe punishment” if the government had killed Jamal Khashoggi, the world’s top oil producer said that “if it receives any action, it will respond with greater action”.

“The kingdom affirms its total rejection of any threats and attempts to undermine it, whether by threatening to impose economic sanctions, using political pressures, or repeating false accusations,” the Saudi state news agency said in a statement quoting an unnamed government official.

“The kingdom also affirms that if it receives any action it will respond with greater action, and that the kingdom’s economy has an influential and vital role in the global economy.”

The Saudi response underlines the mounting international pressure on the kingdom and its de facto ruler crown prince Mohammed bin Salman since Khashoggi disappeared after entering its consulate in Istanbul earlier this month. Turkish officials have said they believe the journalist, who was living in the US, was killed in the consulate.

The Saudi stock market plunged as much as 7 per cent on Sunday, before closing down 3.5 per cent.

Saudi Arabia has repeatedly denied any involvement in Khashoggi’s disappearance. However, the case of the journalist, who wrote a regular column for the Washington Post and was critical of Saudi authorities, threatens to trigger the biggest diplomatic dispute between Riyadh and its western allies in years.

In an interview with CBS News’ 60 Minutes on Saturday, Mr Trump said the US was investigating the disappearance of Khashoggi, which he called “really terrible and disgusting”.

“We’re going to get to the bottom of it, and there will be severe punishment,” Mr Trump said.

Saudi Arabia is the US’s top ally in the Arab world, and has forged strong relations with a Trump administration that has embraced the region’s strongmen leaders and taken an increasingly belligerent stance against Iran.

Analysts have said Mr Trump’s apparent willingness to overlook human rights issues and the increasingly autocratic nature of the Gulf monarchies has emboldened leaders throughout the region to crack down on dissent.

The US president said last week he would not be in favour of the US halting a vaunted $110 billion in arms sales to Saudi Arabia because of Khashoggi’s disappearance. However, there has been growing outrage among US politicians over the allegations that a team of Saudis flew into Istanbul and tortured and killed the journalist.

Separately, Mr Trump has for weeks been seeking to pressure Riyadh – the only oil producer with significant spare capacity to increase crude exports – to help curb the rise in fuel prices as US midterm elections loom and cushion the impact of a fall in Iranian crude exports caused by US sanctions.

Hinting at his frustration with Riyadh, the US president this month told a campaign rally that King Salman may not last “two weeks” without US support.

Saudi Arabia and other Gulf monarchies warmly welcomed the election of Mr Trump as they had become increasingly exasperated by former president Barack Obama, whom they accused of being soft on Iran.

Mr Trump’s first foreign trip as president was to Saudi Arabia in May 2017, where he was regaled with pomp and ceremony. He used the trip to launch a tirade against Tehran, avoided any talk of human rights issues and promised a new era of relations with Arab leaders.

Since Mr Trump took office Riyadh has promised billions of dollars of investment in the US, from arms deals to infrastructure spending. But there have been growing signs of strains in relationship. – Copyright The Financial Times Limited 2018