You really have to see Trump’s bizarre new painting 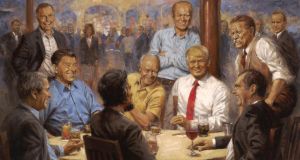 They say a picture is worth a thousand words – unless it’s a shredded Banksy, obviously, in which case it is worth about €1 million. But how to put a value on the majestic artwork Donald Trump was revealed to have gracing the wall outside the Oval Office, as eagle-eyed viewers of 60 Minutes spotted?

So far we know of two other “artworks” that Trump has: that Photoshopped picture of his inauguration crowd (dude, let it go) and the electoral-college map. It is no wonder Trump wanted to spruce the place up in his own way, given that he referred to the White House as a dump. I still cackle at this, given its sheer, disparaging rudeness – like how when Phil Spencer, on Location, Location, Location, shows a couple around a three-bedroom semi with a north-facing garden, Kirstie Allsopp mugs to the camera and draws an imaginary knife across her throat.

Barack Obama has a taste for modern art; George W Bush is a (not half-bad) painter himself; so what of Trump’s choice? The painting, showing former Republican presidents (which some have likened to Dogs Playing Poker), was painted in oil by Andy Thomas, who is more often found painting cowboys. But what is Trump if not a cowboy?

Thomas reports that Trump called him to say how much he liked the painting: “He was very complimentary. He made a comment that he’d seen a lot of paintings of himself and he rarely liked them.”

Let’s take a closer look, then, at Trump’s depiction, and that of his predecessors.

Honestly, I am impressed with the detail in Trump’s hair. But his physique is very strange. Trump’s figure usually resembles a hastily packed sleeping bag, yet here he has the torso of Jon Hamm in Mad Men. But one element is true to life: look at that tiny hand. The hand of a delicate porcelain doll. Credit to Thomas for his attention to detail re Trump’s beverage choice: his well-documented favourite, Diet Coke. There’s no way he’d be seen drinking it from a glass, however, as evidenced in the cracking of cans during interviews (up to 12 a day, apparently).

oh my god, it's hanging in the white house pic.twitter.com/wrq8eo7Bvx

You would think that the president routinely voted the best in United States history would be face on. But not a bit of it. All we get of Lincoln is a peak at a slimmed-down, rather Papa Roach-looking goatee. Lincoln here basically looks like a nu-metal star being difficult in an interview circa 2004. And sitting on the kind of mismatching chair that gets roped in for a pot-luck dinner party. Let’s be honest: Thomas must have struggled to render the great man – and his Easter Island statuesque head – and compromised. Lincoln drinks a simple water, because, like Gwyneth Paltrow, he knows it is important to stay hydrated.

What I love about Ford’s representation is that he looks like a photograph of a suburban dad that comes with the insert of a photo frame. You are tempted to just leave it as is.

Sorry, but this is clearly not Nixon. This is Jack Nicholson, circa The Shining. And remember: “But when the president does it, that means it’s not illegal!” Iconic. Legend. Absolute baller.

Thomas has painted Bush snr going for a very middle-manager look here: open-necked shirt, suit jacket, one hand casually in pocket. This look is very “I’m your boss! But I am also your friend!” The grin suggests he might like to make meetings “fun”; that he points at people and says “Shoot!” when they start to speak. It’s impossible to tell from this angle, but he might even be wearing jeans. He tries to be super woke but never gets it right – and never realises. He brings beer around the office at 4pm on Fridays and forces one on Sarah, even though she has been teetotal for 18 years.

I’ve never really noticed this before, but Teddy Roosevelt looks like every single avuncular character in a cartoon who mends clocks, or does carpentry, or sells books, with his frameless specs and his Gareth Southgate waistcoat. But look closely here at Roosevelt – the grimace on his face, his position – and, I’m so sorry, but it looks like he’s holding in a tremendous fart.

I am not sure what Thomas’s personal beef with Reagan is, but he has painted him drinking what seems to be a sex on the beach. But, hey, look at that deep tan, the relaxed posture – maybe he has just come back from a break in Madeira.

What I like most about the way Bush is depicted is that his facial expression, a fixed grin, speaks to a man who has zero idea of where he is, and what is going on, which is how I imagine most of his time in office went. Remember, this is the dude who, when told of the September 11th terrorist attacks, was holding a children’s book, which he continued to read from.

There’s a tiny rendition of Calvin Coolidge behind the other presidents and, beyond, an even tinier Warren G Harding, and given that I had to Google this guy, that seems appropriate. There is one woman in the painting: walking to the foreground like a precursor to women’s ascendancy in US politics, and eventually, the presidency itself. Oh no, wait. – Guardian