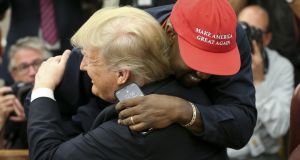 President Donald Trump hit out at the Federal Reserve on Thursday as stock markets in the United States and Europe continued to fall.

In a phone interview with breakfast news programme Fox and Friends, Mr Trump dismissed the Fed’s policy as “ridiculous”.

“I’m paying interest at a high rate because of our Fed. And I’d like our Fed not to be so aggressive because I think they’re making a big mistake,” he said during the morning interview.

“The Fed is out of control,” he said. “I think what they’re doing is wrong,” he added, referring to its interest-rate policy.

Mr Trump said that the Fed’s interest rate increases were “not necessary in my opinion and I think I know about it better than they do”.

His comments marked the second day of criticism by the president. On Wednesday night, he branded the Fed’s policy actions as “loco” and “crazy” following a steep market sell-off.

US markets were heading for another day of steep losses on Thursday, breaking a bullish run this year which has seen equity values rise, driven in part by the performance of the tech sector. Both the Dow and S&P lost ground again, falling by more than 2 per cent during the trading session in Wall Street.

Spooked by US losses on Wednesday, European markets lost ground on Thursday. The Europe-wide Stoxx 600 closed 1.6 per cent lower, reaching its lowest levels since 2016.

Mr Trump said the market plunge is “a correction that I think is caused by the Federal Reserve”.

Mr Trump’s comments on the Fed mark a startling break in precedent for a US president. Most presidents have studiously avoided commenting on the policy of the Federal Reserve, the United States’s central bank, which is supposed to be independent.

Mr Trump, however, said he was not considering firing Jay Powell, the Federal Reserve chairman he appointed to replace Janet Yellen this year.

As markets weighed up the president’s early-morning interview on Fox and Friends, his chief economic adviser Larry Kudlow sought to downplay his comments.

“He has never attacked the Fed’s plan or strategy,” Mr Kudlow told reporters on the White House lawn. “He has never interfered with that. He is giving his opinion, and it’s an informed opinion.”

Mr Trump has long touted the bullish stock market in rallies and press conferences. Republicans are expected to highlight the strength of the US economy and the impact of recent tax cuts on consumers’ pockets as campaigning ramps up ahead of the midterm elections next month.

West has attracted some criticism from fans for expressing his admiration for Mr Trump. His wife, Kim Kardashian West, has held several meetings in the White House on the issue of prison reform. She successfully lobbied the US president to grant clemency to Alice Marie Johnson, a prisoner serving a sentence for a non-violent drug offence.