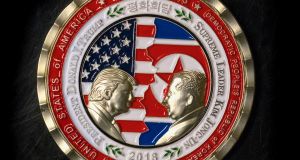 A coin minted for the US-North Korea summit is seen in Washington DC. The planned June 12th landmark summit in Singapore will not now take place. Photograph: Getty Images

The date had been set and the press accreditation process had opened, but on Thursday US president Donald Trump announced that the historic summit with North Korea on June 12th would not go ahead.

The extraordinary rollercoaster relationship between Mr Trump and North Korean leader Kim Jong-un, which has evolved over the last year, had just taken another twist.

Mr Trump’s letter to Mr Kim cancelling the summit was an example of the US president’s unconventional approach to diplomacy, reading more like a break-up letter than a formal memo between two nuclear adversaries.

“I felt a wonderful dialogue was building up between you and me” wrote Trump in his distinctive style, thanking Mr Kim for his “beautiful gesture” in releasing three American hostages. The letter signed off with an appeal for Mr Kim to “call me or write” if he changed his mind – a final, wistful expression of hope that the two men might make another go of it.

But despite the platitudes contained in the letter – an obvious rejoinder to North Korea’s fiery rhetoric – it was ruthless in its intent and damning in its impact.

By the time the president appeared in the White House a few hours later, his language had hardened. The United States, he said, had the most powerful military in the world, and would “never compromise the security and safety of the American people”.

Though Mr Trump said he remained open to constructive dialogue with Mr Kim, the chance of a summit taking place appears remote.

The trigger for the change of heart by Washington was ostensibly comments from North Korean official Choe Son Hui overnight denouncing vice-president Mike Pence as a “political dummy”, and in effect warning the US of nuclear war. But a shift in position was already in motion in the preceding 36 hours.

Reports that Trump was having second thoughts first emanated last weekend after North Korea abruptly cancelled a planned summit with South Korea, and warned about any US plans to impose the so-called Libya model of denuclearisation on North Korea.

Ahead of a meeting with South Korean president Moon Jae-in on Tuesday in the Oval Office, the US president indicated that the June 12th meeting might not go ahead, and appeared to be particularly unhappy at Mr Kim’s recent second visit to China.

Further light was shed on the matter during secretary of state Mike Pompeo’s appearance before the Senate foreign relations committee on Thursday, when he told lawmakers that North Korean officials had not responded to inquiries from the American side over the past few days about the summit’s preparations. All eyes will now be on the response from Pyongyang.

The shock development unfolded in Washington hours after North Korea appeared to destroy its Punggye-ri nuclear site in the presence of foreign journalists – a key concession ahead of the summit.

The last few weeks have also witnessed a string of concessions by Pyongyang – but very few by the United States, as Mr Trump has repeatedly pointed out. The release of three US hostages, the commitment to halt nuclear activity and the destruction of the Punggye-ri site have been symbolically important concessions from Mr Kim’s perspective.

That the US has now abruptly pulled out of the summit is likely to be seen as a massive breach of trust despite Mr Trump’s emollient language in his letter.

Mr Trump’s decision has also implications for North Korea’s neighbours. The cancellation will be a major personal blow to South Korean president Moon Jae-in, who has played a key role in the thawing of relations between Washington and Pyongyang in recent months, which began in earnest with the attendance of a North Korean delegation at the Winter Olympics in February in South Korea.

Just this week the US president praised Mr Moon for taking a more open approach to North Korea than some of his predecessors, lauding his role in the process. But it appears that Seoul had little indication that Thursday’s decision was in the offing.

Mr Moon called an emergency late-night meeting of his cabinet and advisers following the announcement. “We are trying to figure out what President Trump’s intention is and what its exact meaning is,” the president’s spokesman told reporters.

While Mr Trump’s decision is unlikely to cost him much political support – it will delight many in the more hawkish wings of the Republican Party – the implications of his diplomatic flip-flopping could be profound. Not only is the US back at square one when it comes to North Korea, the relationship between the two powers is likely to have been damaged by Mr Trump’s failure to follow through with the promised summit.

More than six months after the world appeared to be moving perilously towards nuclear war as North Korea intensified its nuclear activity and Mr Kim and Mr Trump traded insults, the prospect of renewed nuclear tensions has resurfaced as strong as ever.