Perfidious Albion: an insult or an apt description of Brexit Britain? 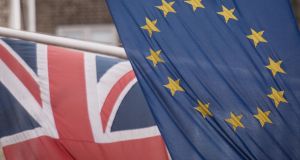 Britain’s former ambassador to the EU Ivan Rogers has explained how frictionless trade requires regulatory alignment as well as a customs union, describing Theresa May’s decision to rule out a Norwegian or Swiss model as an act of folly. Photograph: Stefan Rousseau/PA

It was standing room only all day (I stood throughout) at a conference in London this week on Brexit and the island of Ireland which saw more than 20 speakers explore an issue that is now at the centre of the negotiations between Britain and the EU. Former Northern Ireland secretary Owen Patterson provided an astringent start to the day, sweetened only a little by the standard Brexiteer dash of sentimentality about the ties of blood and culture between Ireland and Britain.

“We know the whole Irish establishment loathes Brexit,” he said, before warning Theresa May against attempting to “ram” the Border backstop through the House of Commons.

Brigid Laffan, a professor at the European University Institute in Florence and a bete noir for Brexiteers, identified their bewilderment at Dublin’s tough approach to Brexit as a failure to take Ireland seriously as a state. “It is that lack of recognition of the right of the Irish state and its political system to take care of its own interests in this turbulent world that worries us and in a way, at times, enrages us,” she said.

Political scientist Brendan O’Leary suggested the English would understand the EU only after they had left it, pointing out that it would be the European Court of Justice (ECJ) rather than the House of Commons that would adjudicate whether any withdrawal agreement was being respected.

“The UK has a most archaic political system, the principle of parliamentary sovereignty . . . and that principle is deeply problematic because it explains perfidious Albion. Perfidious Albion is not some mistake or insult by foreigners, it’s an accurate representation of your constitutional disposition.

“Any parliament can unwind any treaty, it’s not binding in constitutional law. You made the Good Friday Agreement solemnly with Ireland and yet you claim in your constitutional tradition to be able to modify any feature of that agreement according to any wish of any future parliament. That makes you a fundamentally unreliable partner in the making of treaties or constitutional arrangements,” he said.

If Britain is constitutionally unreliable as a partner, it is also politically unstable, not least because of a Dolchstosslegende, or stab-in-the-back myth that is taking hold about Brexit on the right of the Conservative Party. Dominic Cummings, campaign director of Vote Leave, articulated the myth eloquently in a blog post this week, describing the argument over the Border as “bullshit” and accusing civil servants of preventing any planning for a no-deal Brexit.

The Daily Mail has accused elite figures of seeking to thwart Brexit, fuelling a growing anxiety among Brexiteers that they are losing control of the negotiations

Twice this week, the Daily Mail’s front page has identified elite figures it accuses of seeking to thwart Brexit, fuelling a growing anxiety among Brexiteers that they are losing control of the negotiations. In a lecture in Glasgow on Wednesday, Britain’s former ambassador to the EU, Ivan Rogers, argued that one reason the negotiations were going badly was that the British government had shied away from explaining to the public the true nature of the choices it faced over Brexit.

“One of the most powerful charges made against the UK political elite by those advocating Brexit has always been that it deliberately mis-sold the nature and direction of the European project to the British people,” he said.

“But if we are to avoid mis-selling the British people on our post-Brexit options, we need a far more honest debate based on clear, accurate, realistic accounts of the pros and cons of each of the options. Not on fantasies, or incoherent and muddled thinking.”

Rogers dismisses as outlandish the British government’s aspiration to regain total control of laws, borders and money and exercise full sovereignty, without intrusion by a foreign court, but still retain virtually all the benefits of current trading arrangements, while diverging from them to taste and retaining a major role in setting the key policies of the EU.

Characterising the EU as a “regulatory union” in economic terms, Rogers explained how frictionless trade required regulatory alignment as well as a customs union, describing May’s decision to rule out adopting a Norwegian or Swiss model as an act of folly.

“The sooner we realise there are no perfect choices, that there are serious trade-offs between sovereignty and market-access interests and that we are best-off if we make stone-cold sober judgments of where sovereignty at the national level can be real and effective, and where it is purely notional and actually a material loss of control, the better for the UK,” he said.