US imported 8.27m cars and light trucks last year, more than half from Mexico and Canada 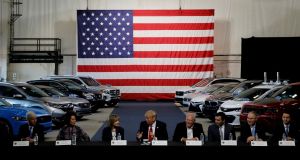 Donald Trump with US car industry leaders. The president has repeatedly stated his frustration at the difference between US tariffs on passenger vehicles and higher duties elsewhere. Photograph: Reuters

The Trump administration has initiated a national security investigation into automotive imports that would clear the way for the imposition of new tariffs on cars from Europe, Japan and South Korea and lead to a major escalation of global trade tension.

US president Donald Trump said on Wednesday night he had instructed Wilbur Ross, the commerce secretary, to look at launching an investigation into imports of cars, trucks and automotive parts, using section 232 of the 1962 trade Act – the national security provisions used to justify the introduction of tariffs on steel and aluminium earlier this year.

In a statement sent out at the same time, Mr Ross said he had initiated an investigation. “There is evidence suggesting that, for decades, imports from abroad have eroded our domestic auto industry,” Mr Ross said. “The department of commerce will conduct a thorough, fair and transparent investigation into whether such imports are weakening our internal economy and may impair the national security.”

The move was foreshadowed by Mr Trump earlier in the day when he tweeted: “There will be big news coming soon for our great American Autoworkers. After many decades of losing your jobs to other countries, you have waited long enough!”

An industry group representing dealers who sell foreign car brands in the US said the move would hurt American consumers as well as a multi-billion-dollar industry. “To treat auto imports like a national security threat would be a self-inflicted economic disaster for American consumers, dealers and dealership employees,” said Cody Lusk, president and chief executive of the American International Automobile Dealers Association.

John Bozzella, chief executive of Global Automakers, said: “It’s a bad day for American consumers. The US auto industry is thriving and growing. Thirteen, soon to be 14 companies, produced nearly 12 million cars and trucks in America last year. To our knowledge, no one is asking for this protection. This path leads inevitably to fewer choices and higher prices for cars and trucks in America.”

Japan responded in unusually strong terms. “If they were to go ahead with such wide-ranging trade restrictions, it would throw the global market into confusion,” said Hiroshige Seko, minister of economy, trade and industry. “There could be a negative effect on the WTO multilateral trading system. It’s extremely regrettable.”

Launching a section 232 investigation would not necessarily lead to tariffs. The investigation itself would take months and lead to recommendations to the president. In the case of the steel and aluminium tariffs, it took almost a year before the duties were announced and took effect. Even so, companies and countries are continuing to lobby for exceptions.

The European Union, Canada and Mexico all face the potential expiry of temporary exemptions for those tariffs on June 1st.

“Using section 232 against steel and aluminium was already a stretch, a violation of the World Trade Organisation and against the spirit and the letter of the law. Using it against autos would be preposterous,” said Luis de la Calle, a Mexican economist and trade expert who was part of the original Nafta negotiating team.

The move would also mean another Trump challenge to the WTO’s rules, which include a rarely invoked national security exception that allows members to impose trade barriers in an emergency.

But Mr Trump has made his frustration clear repeatedly at the difference between the relatively low 2.5 per cent tariff on passenger vehicles that the US charges and higher duties elsewhere. One target has been the EU’s 10 per cent duty on passenger vehicles, although Europeans counter that the US still has a 25 per cent tariff on the pick-up and other light trucks that are a lucrative part of the US market.

In what was seen as a move to placate Mr Trump amid broader trade talks, China on Tuesday announced that it would be lowering its tariff on passenger cars from 25 to 15 per cent.

The launch of the 232 investigation will almost certainly draw an angry response from the EU, which is already considering retaliation against the steel and aluminium tariffs. A unilateral move by the US to raise tariffs would also almost certainly be challenged at the WTO and lead to further retaliation by US trading partners.

“It’s flabbergasting. What makes the imports of cars a threat to the national security of the United States? It’s flagrant protectionism,” said one European official.

It also risks inflaming talks to renegotiate Nafta, which have stalled in recent weeks over the issue of the content rules for cars.

One industry official said Mr Trump may be seeking further leverage in those talks in which US negotiators have been seeking to tighten the content rules and include provisions on wages to force carmakers to shift production to the US from Mexico.

But supporters of Mr Trump’s aggressive approach to trade argue it is just the sort of move needed to revive what they see as a wounded US industrial base.

“What was it that gave us the ability to outmanoeuvre Germany and Japan [in the second World War]? It was our auto industry. It was our industrial might. Everything was here,” said Dan DiMicco, a former trade adviser to the Trump campaign and ex-chief executive of Nucor Steel.