UK Foreign Secretary Boris Johnson discussed the UK’s relationship with Russia in a phone conversation with Russian pranksters Alexei Stolyarov and Vladimir Kuznetsov who were posing as the Armenian prime minister. Audio: Lexus and Vovan 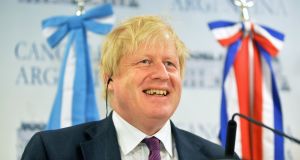 British foreign secretary Boris Johnson, who took a phone call from two Russian pranksters, one of whom posed as the prime minister of Armenia. Photograph: Pablo E Piovano/Bloomberg

Two well-known Russian pranksters enjoyed an 18-minute phone call with British foreign secretary Boris Johnson on Thursday after one posed as the prime minister of Armenia.

UK officials said the Kremlin was behind the call after Moscow was “internationally shamed” by the poisoning of the former Russian spy Sergei Skripal and his daughter Yulia in Salisbury.

The Foreign Office said Mr Johnson had realised it was a hoax and ended the call. A Whitehall investigation is now under way to determine how the callers were able to get through to the high-ranking minister.

Mr Stolyarov told the Guardian newspaper he had posed as Nikol Pashinyan, Armenia’s prime minister, and had spoken with Alan Duncan, British foreign minister, before being passed through to Mr Johnson.

In a recording of the phone conversation, which was posted online, Mr Johnson congratulated Mr Pashinyan on his “remarkable success” and discussed tensions with Russia since the attack on the Skripals.

Mr Johnson told the callers: “Obviously we had hoped to have better relations with Russia than we currently do, I’m afraid Russia seems to be unable to resist malign activity of one kind or another.

“We will continue to tighten the squeeze on some of the oligarchs who surround Putin ... you throw a stone in Kensington and you’ll find you’ll hit an oligarch.”

He added that he was “almost 100 per cent sure” Mr Putin was behind the attack.

The pranksters also told Mr Johnson that the Russian president had spoken of his “influence” over Mr Corbyn and that his goddaughter “met with people of Mr Corbyn”.

To which Mr Johnson replied: “I am sure our intelligence will be listening on this line and they will draw the relevant conclusions.”

Downing Street said: “This shouldn’t have happened and an investigation is under way to determine the circumstances around this call and to make sure this doesn’t happen again.”

The Foreign Office added: “We checked it out and knew immediately it was a prank call. The use of chemical weapons in Salisbury and Syria and recent events in Armenia are serious matters. These childish actions show the lack of seriousness of the caller and those behind him.” – Copyright The Financial Times Limited 2018