Maureen Dowd: ‘Trump is the media’s villain and we are his’

Pulitzer prize-winning columnist on turmoil in Washington and thriving journalism 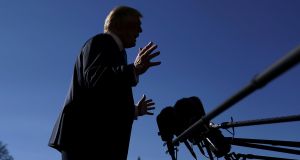 Donald Trump: ‘We’re in a constant state of shock that all of these norms are being broken,’ Maureen Dowd says. Photograph: Alex Wong/Getty

Don’t be fooled. The veteran Pulitzer prize-winning columnist, whose weekly New York Times articles also appear in The Irish Times, is no snowflake. Her combative, gabby takes on people and power inside the Washington DC beltway rendered her persona non grata with the Clintons.

George W Bush nicknamed Dowd “the Cobra” (although he never fell out with her). She’s the undisputed queen of the Washington commentariat, plying her trade in the interstices between politics and personality, and dismissive of anyone who doesn’t agree with her that it’s the personality that’s more important in the end.

But still, she acknowledges, she’s never seen anything like the Trump era.

“This is the most incredible thing that’s ever happened in politics in Washington,” Dowd says. “I can’t even describe it. We’re in a constant state of shock that all of these norms are being broken.”

The impact on her own profession has been far-reaching. “I mean you can’t wrap your head around it. It’s thrown journalism into turmoil.”

In the wake of the #MeToo movement, there have been recriminations among feminists about how they were willing to tolerate Bill Clinton’s behaviour towards women

She mentions a controversy that erupted last week when the New York Times rewrote a front page headline following furious reaction from readers who believed it was too generous to the president, criticism that was echoed by many of the newspaper’s own staff in a bad-tempered internal meeting.

Journalists are now in a strange position, she says. “Donald Trump often says ‘journalists want me to be re-elected because they’re making so much money from me’, because we get a lot of digital subscriptions and cable news does really well. It’s not that journalists want him to be re-elected but they do thrive. Alfred Hitchcock used to say the secret to a great movie is a great villain. Trump is our villain and we are his.”

A typically powerful Dowd column recently contrasted two photographs of two presidents. One picture was of Barack Obama bending down so a young black boy could touch his hair to compare it with his own.

“It’s a lovely photograph that kind of encapsulates the giddy optimism that we had in 2008 that we were moving past racial divisions in this country and that president Obama represented all of these remarkable things that were going to bring us into modernity and get us past the past.”

Inevitably, much of the elation and idealism that accompanied Obama’s election in 2008 ebbed away as it collided with the realities of power. But Trump is such a negative reverse image of Obama, Dowd agrees he has to be understood as the product of a white backlash against the first black American president.

“But president Obama has to accept some responsibility too,” she says. “I think people voted for him because they wanted radical change. He thought he was so much of a change that he should tamp down everything else. And there was still this underlying hunger for change that he did not satisfy.”

The second photograph was of Donald Trump in an El Paso hospital with an infant orphaned by the racist mass murder there. What kind of man gives a thumbs up and a broad grin to the cameras at a moment like that?

“He’s all about his id and his ego, and everything gets filtered through that,” says Dowd, who has her own particular insights into the 45 per cent of Americans who believe Trump is doing a good job.

“My family are all Trump supporters,” she says. “Democrats are deluding themselves if they think that most Republicans are waking up to the horrors of Donald Trump. My family is much more passionate about him now than they were the first time they voted for him.”

Dowd won her Pulitzer in the 1990s for her coverage of the Clinton White House. In the wake of the #MeToo movement, there have been recriminations among feminists and liberals about how they were willing to tolerate Bill Clinton’s behaviour towards women in general and Monica Lewinsky in particular. Dowd stoutly defends her own record on the issue.

“It felt like I was the only prominent feminist writer who tried to hold the Clintons accountable on this,” she says. “I said it was an inappropriate sexual dynamic between Monica and the president, because he’s supposed to be the father of the country and also the father of his staff.

“But I also had a hard time with the idea of Hillary Clinton as a feminist icon when she was leading campaigns to demonise women who were telling the truth about sexual encounters with her husband. I did that 20 years ago, and the Clintons cut me off. I was never allowed to interview either of them again or have any real contact with their campaigns.”

Would a contemporary politician get away with what Bill Clinton got away with?

“Oh, absolutely not. Men are walking on eggshells in this society, as well they should. And Hillary would not get away with it either.”

That Dowd remains at the centre of the Washington whirl was evidenced by her role in one of the biggest political controversies of the summer. Her account of her intimate tete-a-tete with Nancy Pelosi, during which the Democratic House Speaker spoke disparagingly about the four left-wing congresswomen known as The Squad, led by Alexandria Ocasio-Cortez, started a firefight within the Democratic party. It became a wider conflagration when Trump told the four women to go back to the countries they came from (all but one was born in the US).

“I hate to admit that I didn’t realise when she said it that that it would be this cascading fight,” says Dowd with what sounds a little like relish. “On the surface it was about a Bill to help bring more funds to people at the border, so that we wouldn’t have these horrible scenes we’re seeing. AOC, as we call her, suggested that there was some racial dissing by Nancy Pelosi, which really was unfair.

“I love AOC’s idealism and passion and often I think the Democrats are too wimpy. She is very fiery and I love her dreams for climate change. But it was wrong to accuse Pelosi of that.”

Dowd has nailed her colours to the mast as a supporter of Pelosi’s efforts to put a brake on the left in order to give Democrats the best chance of beating Trump next year. Does she think they can do that?

“Well, they’ve got to get a candidate who can inspire loyalty and excitement.”

What about the suggestion that frontrunner Joe Biden has “lost a step”? And why are so many top American politicians so old? Pelosi is 79, Biden 76. Of the other Democratic frontrunners, Bernie Sanders is 77 and Elizabeth Warren a mere 70. If any of those Democrats gets to the White House, they’ll be the oldest ever first-term president, breaking the record set by the current incumbent (Trump is 73).

Dowd laughs. “I know. It’s a wild situation,” she says. “I asked Pelosi about this the other day and she says she doesn’t mind being asked about her age, but it has to be not only women, you know, you have to ask [Senate majority leader] Mitch McConnell too, who’s also older [McConnell is 77].

“But Trump is trying to do with Biden what he did to Hillary. When Hillary got pneumonia and got sick, he was suggesting that her health was terrible. In this case, he’s using some gaffes that Biden has made recently to suggest that as Trump put it, ‘He’s not playing with a full deck’. It’s interesting, because Biden is known for his gaffes and I thought they would seem like nothing compared to Trump’s gaffes. But Trump is so brutal and he has this bat sonar for going after weaknesses, so he is linking up the gaffes to Biden’s age. Even Democrats are now wondering is this going to be a problem.”

We’ve seen in previous primary campaigns that the early frontrunner often doesn’t win in the end. If Biden slips up who’s the best hope for the Democrats?

“I don’t know, “ says Dowd. “Everyone else thinks the Democrats have too many candidates, I don’t think they have enough. Pelosi is worried that if Warren and Sanders are in the lead, the mainstream Democrats in the middle of the country are going to get turned off. She’s trying to protect all of these moderate Democrats who won seats in Trump country.”

The traditional manoeuvre in US presidential politics has been to appeal to the base of your party during primary season then tack to the centre for the actual election.

Maureen Dowd will take part in a public conversation at the Kennedy Summer School on Saturday, September 7th. kennedysummerschool.ie. Her column appears every Monday in The Irish Times