Who will benefit from recession in US – the left or right?

US Politics: Through tariffs imposed, Trump will have played role in looming downturn 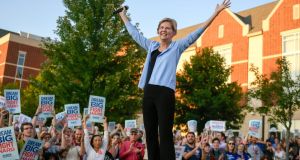 Cui bono? When the economic cycle does its inexorable work, and a recession strikes the US, which political force will benefit? What the question lacks in taste, it more than makes up for in importance.

It is also a nightmare to answer. To understand the opacity of the link between economics and politics, recall the last crash. A fiasco that was made in the private sector and eased by the state should have been the left’s biggest opening since the Great Depression elevated Franklin Roosevelt.

Barack Obama was duly elected president. John Maynard Keynes became a pop-culture icon from beyond the grave. But the moment fizzled. The lasting products of the crash were instead the Tea Party movement and the presidency of Donald Trump.

Going into the next recession, the principal forces in the US are his populist right, the populist left of Senators Bernie Sanders and Elizabeth Warren and – as frail-seeming as its champion, Joe Biden – the old centre.

All three have reasons to think a recession would leave them ascendant. The populist right can stoke a siege mentality against a complacent Federal Reserve and a beggar-thy-neighbour China. The recession will also take place in a country whose foreign-born population is touching its historic peak: no demagogue of any talent could fail to exploit the likely schisms.

The belief that Trump cannot survive a recession before November 2020 is probably right. But the question here is not which person wins one election. It is which idea rules the decade post-recession. In times of scarcity, when groups vie over less and less, Trumpism can surge long after its eponym falters.

Its challenge will be disavowing culpability. In 2016, the populist right comprised untainted outsiders. At the next recession, it will have been at least four years in government. Through the tariffs it has imposed, the Trump administration will have had a hand in the downturn. Populism is always in its element in opposition, spooking the elite into concessions without braving the reputational wear and tear of high office. The worst thing that ever befell it might turn out to be power.

All of which should encourage the centre. A recession – the softening of which is a technocratic art – might make voters glad of a dispassionate expert class. Some boom-era tenets, including free trade, have become more popular, not less, during the Trump years. The centre also answers to the latent desire for a quiet life.

A rare zinger in the Democrats’ wonkish primary race has come from the moderate senator for Colorado. “If you elect me president,” said Michael Bennet, “I promise you won’t have to think about me for two weeks at a time.” Such is the mood of millions: exhaustion, not hunger for an equal and opposite reaction to Trump.

Still, there is something fanciful about a Bourbon restoration for the Bilderberg classes, so soon after their fall. Biden comes across as a viable winner in 2020, but also as a holding pattern: a one-term breather while Americans decide on the way of the future.

A process of elimination seems to leave the populist left as the victor of the next recession. But there is much more in its favour than that. Polls suggest that fewer and fewer Americans see the market as a kind of Revealed Truth, in which the rich and poor both deserve their lots.

Most now recognise dumb luck and structural factors beyond individual control. Government-funded single-payer healthcare is popular and so is a wealth tax. Then there is Policy Mood, a composite of public attitudes to various questions. Its score for 2018 was the most “liberal” (in the US sense) ever recorded. Its highest previous reading was in 1961, which portended Lyndon B Johnson’s great society.

And this, remember, is before the coming of the recession, which is likely to worsen inequality in a country that is already nearer Chile than Germany in the Gini coefficient. Wall Street Democrats who hate Elizabeth Warren might wonder if the choice is between her controlled redistribution now, or a larger reckoning with the public down the line.

Moderation to the point of tedium is still the Democrats’ surest way to victory next year. But if the question is what longer-lasting energies will be released by a recession, it is hard to look outside the left. It does not just have existing trends of opinion on its side, it has a relatively clean skin. It has not presided over a downturn in recent memory.

And none of this reckons with the organisational intensity of people who feel cheated out of what should have been “their” era after 2008. Precisely because the left failed to win the last crisis, it is unlikely to miss out again. – Copyright The Financial Times Limited 2019