Janan Ganesh: Notion of a unified world populism is a myth

US Politics: There are lots of populisms. To speak of them in the terrifying singular is alarmist 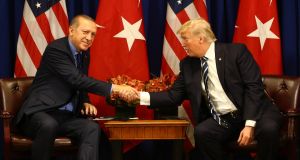 Populists are amassing an empire on which the sun never sets. Leaders of their stripe govern as far east as the Philippines and as far west as the US. The European branch now has no less a nation than Britain as its unofficial garrison. When Jair Bolsonaro was elected president of Brazil almost a year ago, several more time zones were folded into the widening realm.

Naturally enough, then, liberals fear encirclement and subversion by a kind of Popintern, run or at least egged on by Washington, just as the Comintern took orders from Soviet Moscow. The idea of liberalism penned in under an American-led siege is not the Bizarro World plotline it seems. Donald Trump really has been friendlier with strongmen than with more conventional allies. The US president’s former aide Steve Bannon really is working on what he calls a “global populist movement”.

The trouble is that the first and second of those words repel each other like magnets. Several years after its breakthrough, we still talk of populism as something of a monolith. To continue to do so is to give it too much credit. What its adherents have in numbers and geographic spread, they lack in cohesion. And of all their differences, the deepest is between the US and the rest.

It should not need saying that what Trump jeers as “globalism”, much of the world thinks of as Americanism. To be a nationalist in, say, France or parts of Asia, is to renounce a recognisably American (or least Anglo-Saxon) cast of mind: commercial, individualist, morally liberal.

Populists in these places might look to Trump for lessons in how to win elections. They certainly value the cover he gives them for behaviour his predecessors often scolded and punished. But there will always be a limit to their affinity. Their interests can only overlap so much with a man who sees the world as a web of potential openings for US business and US power.

This tension does not just exist in theory. Examples of intra-populist schism are multiplying. Few world leaders resemble Trump in style and idiom as much as the Philippine president Rodrigo Duterte. And still the pair clash over the latter’s closeness to China.

Few get on with Trump as naturally as Indian prime minister Narendra Modi. And still the US has stripped Delhi of preferential trade status. As for Turkey’s president Recep Tayyip Erdogan, he has upset the White House by turning to Russia for defence purchases.

Even in Trump’s dealings with the UK, cracks show as soon as the superficial bonhomie gives way to anything of substance. British voters, fans of Brexit included, will not countenance a trade deal that exposes the National Health Service to what they see as a feral American profit motive. Their government ignores them at mortal political cost.

The wonder is not that such splits happen among populist kin. The wonder is that they do not happen more often. They probably will. Populism is not much of a binding agent. The fact that two governments share a commitment to the nation state and a kind of tonal belligerence is not enough to bind them. If anything, it makes them likelier to assert their raw interests until they clash.

No doubt, populists can act as spoilers of the existing world order. But whether they can forge another one, with a Davos or Bretton Woods of their own, must be more doubtful. Their animating premise, after all, is the essential separateness of nations. Their diplomatic style – that air of permanently offended amour propre – makes for inherent rockiness. The idea of a multinational populist movement is not quite a contradiction in terms, but it is getting there. There are lots of populisms. To speak of them in the terrifying singular is alarmist.

Even if populists could act in something approaching concert, the US will always make for an awkward leader. Versed in the history and thought of the European right, Bannon must know how much it fears the debasement of the continent’s culture by the capitalism that Trump incarnates. When the leaders of Singapore and Malaysia asserted “Asian values” in the 1990s, it was likewise in opposition to a US-flavoured materialism.

Whatever their personal fondness for Trump, populists in these regions still have the same qualms about American influence. He will find it ever harder to corral his supposed brethren from London to Manila.

When the Soviets found worldwide revolution too difficult, they settled for the consolidation of their ideology at home. It was more than enough to be getting on with. Trump will end up in the same place. Call it populism in one country.– Copyright The Financial Times Limited 2019