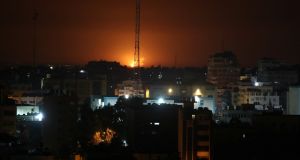 Flame and smoke are seen during an Israeli air strike in Gaza on Sunday. Photograph: Mohammed Salem/Reuters

Gaza militant group Islamic Jihad indicated on Monday night that the current round of fighting was over, after it had fired more than 80 rockets at southern Israel, a week before the Israeli election.

“I am not hurrying into war but we will do what it takes to bring back total security for the residents of the south. I’m talking about a war,” he said. “I only go to war as a last option, but we have prepared something you can’t even imagine.”

The latest exchanges began on Sunday and followed a period of relative calm as Israel and Hamas continued efforts, via Egyptian mediators, to reach a long-term truce.

The Israeli army said troops identified two men attempting to plant an explosive device on the Gaza border fence and opened fire at them. One of them – an Islamic Jihad militant – was killed.

Such incidents are not uncommon but the catalyst that plunged the sides into another round of tit-for-tat violence was a video, shared widely on Gaza social media, showing an Israeli bulldozer scooping up the body of the dead militant and bringing him back across the border.

Israel defended the action, saying it hoped to use the body as a bargaining chip to recover the remains of two Israeli soldiers held by the Hamas authorities in Gaza since 2014.

The Islamic Jihad launched some 30 rockets, sending residents of southern Israel to the bomb shelters. Overnight on Sunday, Israel hit militant targets across Gaza and also targeted what was described as an Islamic Jihad base near the Syrian capital Damascus. Two Islamic Jihad members were killed in this strike along with four other pro-Iranian fighters, according to a British-based Syrian war monitor.

Abu Hamza, a spokesman for the Al-Quds Brigade, the Islamic Jihad military wing, warned “the fight is not over” and on Monday afternoon heavy rocket fire resumed from Gaza at Israeli population centres in the south. Israel pounded Gaza from the air with waves of air strikes but was careful to avoid Hamas targets, hoping the main militant group would not join the smaller Islamic Jihad in the current round of fighting.

Mr Netanyahu has largely ignored the seemingly intractable problem of Gaza during the election campaign and he knows that the failure to end the endless rounds of violence amounts to a major failure during his years of rule.

The last thing he needs is a war days before an election, but he needs a ceasefire that does not leave him looking weak in the eyes of the Israeli voter.