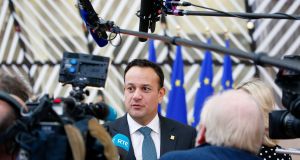 EU leaders on Friday night failed to break a deadlock on the EU’s 2021-2027 budget, adjourning a special summit in Brussels that reflected deep divisions between net contributors and recipients of EU funds.

European Commission president Ursula von der Leyen said that “sometimes things have to take their time to mature”, but she and European Council president Charles Michel, who chaired the 48 hours of plenary and bilateral talks, remained confident an agreement was still possible.

Mr Michel refused to be drawn on when another summit would be held, but said the meeting was an essential and useful exploration of positions. It was a particularly difficult discussion because of the €75 billion gap left by Brexit in the budget.

Ms Von der Leyen warned, however, that unless they resolved issues quickly “there would be no funds for Erasmus, for research, or border protection” from early 2021.

“The differences were simply too big,” German chancellor Angela Merkel said, adding that a new proposal put forward by the commission on Friday afternoon failed to break the deadlock. “We had a first attempt, but we are still early in the year,” she said.

Taoiseach Leo Varadkar said following the meeting that he had “very clearly outlined the position of Ireland, which is that as a wealthy, prosperous, economically successful European country we are willing to contribute more to the budget over the next seven years, but not if that meant payments to Irish farmers and important programmes like regional development, social development and Interreg were cut back.

“These programmes, particularly the Common Agricultural Policy, are essential for the incomes of farmers, also for the rural economy, for regional development. And if we’re going to be asking farmers and the agrifood sector to do more to combat climate change, we can’t at the same time expect them to accept being paid less.

“So I took a very strong position on this, as did many like-minded countries across the European Union. This matter is going to be revisited in a few weeks’ time.’ ”

Ireland and France focused on opposing farm cutbacks, which under the Michel proposals would mean losses of some €78 million a year to Irish farmers while the Cap shrinks by €53 billion over seven years.

The discussions between leaders yesterday appeared to have focused most on placating the “frugal four” group of net contributors to the budget, Sweden, Denmark the Netherlands and Austria, plus Germany, who have insisted that the budget ceiling should not be increased beyond its current level of 1 per cent of EU gross national income (GNI).

Diplomatic sources reported that the new commission technical paper under discussion on Friday night came close to the earlier Michel compromise in proposing a 1.017 per cent budget ceiling and left broadly intact the one-third one-third, one-third repartition of funding between natural resources (farming), cohesion and regional funding, and the so-called modernising elements of the budget, such as those to do with climate change, migration and the digital economy.

The commission is also suggesting an increase in the share of climate-related expenditure across all policies from 25 per cent to 27 per cent and up to 30 per cent by 2027.

But there were attempts to sugar the pill for the “frugal four” by promising to maintain their current budget rebates – the controversial system instigated by Margaret Thatcher by which net payers claw back some of the “excessive” contributions. Austria would even get a €100 million increase.

And the Netherlands would be allowed a special concession in being able to hold on to a greater share of the customs duties collected by it on behalf of the union.

It was not enough, however.

But even if the talks last night had managed to forge a consensus among the 27 – apparently still some way off – the challenge of getting the necessary approval from the much more ambitious and strongly militant European Parliament remains formidable. A €230 billion gap still has to be bridged.