Economic rights being eroded under US liberals’ noses 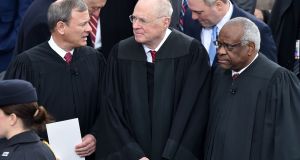 More than the partisanship, the lavish campaign expenditures, even the gun laws, it is the prominence of supreme court justices in American life that distinguishes the US among western polities. Such is the fame of these robed masters (and their voting records) that the nomination of the next one already feels as political as any election.

In place of the retiring Anthony Kennedy, so often the swing vote in court decisions, Donald Trump will nominate a purer conservative. The prospect has millions of Americans reaching nervously for their rights. The question is: which rights?

The most common dread is a liberal reversal in the otherwise one-sided culture war. If the court overturned the 45-year-old ruling in Roe v Wade, states would regain the freedom to ban abortion. Democrats also fear for affirmative action and voting rights.

They are prudent to assume the worst. All the same, there are brakes on the court’s cultural ambitions. To overturn Roe, or uphold state-level curbs on abortion, is to invite national acrimony. The women’s marches of 2017 would turn out to be mere trailers for a larger protest movement. This might include active defiance of anti-abortion laws.

In principle, the justices are unmoved by political realities. In practice, they heed them – at least sometimes, at least unconsciously. They survive on that mysterious fuel called legitimacy, and it drains whenever a ruling offends public opinion or disrupts the national peace.

From Ronald Reagan nominee to upholder of same-sex marriage, Kennedy had a politician’s feel for changing social norms and a realist’s reluctance to buck them. It is not such a rare trait among judges, at least once appointed.

The US does not have a consensus on reproductive rights but it does have an uneasy stalemate. Most think abortion should be legal, though with limits. Just as there are “pro-choice” voters who do not admire Roe as law, there are “pro-lifers” who do not think their cause worth pursuing at all costs. It is a daredevil court that tampers with this truce.

None of this means that Roe is safe. It just means that a conservative court’s ultimate power lies elsewhere.

Republican’s old mistrust of unelected power – a fair one, and not just in retrospect – has become supple mastery of it

The erosion of economic rights is a simpler business than the culture war. Deregulation can be done from the bench without much fuss or even attention. The issues are too obscure, the losers too dispersed and ill-organised. And the prize – a court redolent of the Gilded Age, when it ruled for property rights over labour – is too large for conservatives to resist.

Last month, the court ruled against mandatory union dues for public sector workers. A month earlier, it upheld limits on workers’ class-action suits against employers. From the next justice, conservatives expect a tighter construal of government powers under the Clean Air Act and the Fair Housing Act.

None of these things are totems. Next to the showdowns over sex and race, they will struggle to rouse the same protest crowds. But their cumulative effect matters. Even without a court reversal of Obamacare, the material life of some Americans could become more precarious over time.

Republicans talk a populist game while pruning the state through technocratic fiat and judicial appointment. Their old mistrust of unelected power – a fair one, and not just in retrospect – has become supple mastery of it.

Scott Pruitt’s laissez-faire Environmental Protection Agency is a case in point. The struggle to “win” the court is part of the same project. It is a strange project, given Trump’s following. Voters who blame trade for the debasement of their employment terms are not going to shrug when judges bring about the same ends. It promises to widen the rift between Republican donors, who loathe the paternalist state, and Republican voters, many of whom count on it.

But for once, this is not about Trump. Any Republican president would come under conservative duress to nominate a “sound” justice. The candidate-vetters and litmus-testers, such as the Federalist Society, sense a historic opening. The trick is to understand the breadth of their aims: cultural revanchism, yes, but also the quiet grind of deregulation.

Liberal vigilance to the first should guard against it. The second threatens to pass without a fraction of the same noise. – Copyright The Financial Times Limited 2018