A massive rescue effort continues in northern Thailand to free a young soccer team, as video emerged showing medics carrying what appears to be one of the four rescued boys, boarding a military helicopter. Video: Reuters 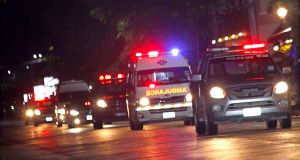 A dangerous rescue mission is due to resume at a cave in northern Thailand on Monday morning after four boys from a group of 12 children who have been trapped deep underground for more than two weeks were freed.

“Today was the best situation – in terms of kids’ health, water and our rescue readiness,” Narongsak Osatanakorn, the head of the joint command centre coordinating the rescue, said at a press briefing on Sunday.

He said the operation, which was launched at 10am on Sunday, had proceeded hours faster than expected. “It has been our masterpiece work,” he said.

After completing the 3.2km journey through the muddy, jagged cave, the divers turned and hugged the boys, who emerged wearing full-face scuba masks, he said.

Not Space-X. But a Thai version of ⁦@elonmusk⁩ idea of an air-filled tube for trapped boys to get out, being tested near #Thamluangcave pic.twitter.com/udsKAdHLgY

Got more great feedback from Thailand. Primary path is basically a tiny, kid-size submarine using the liquid oxygen transfer tube of Falcon rocket as hull. Light enough to be carried by 2 divers, small enough to get through narrow gaps. Extremely robust.

All four boys had safely reached a hospital in Chiang Rai, the nearest major city, he added. He did not name which four of the boys were removed first, nor the basis on which they were selected.

Ninety divers were involved in Sunday’s operation, 50 foreigners and 40 Thais. “Our job is not completely done,” Mr Osatanakorn said. “We will have to do the next mission as successfully as the one we did today. The rest of the kids are in the same spot.”

The remaining eight boys and their 25-year-old coach would be brought out in further operations starting in the morning.

“Air tanks and systems have to be put in place again,” Mr Osatanakorn said. “I can’t tell you exact timing of the next operation but I can say it will be more than 10 hours to 20 hours. It will not be more than 20 hours. I have to check all factors are stable. The operation then will be carried out.”

The extraction of the four boys took place more than two hours earlier than the most optimistic deadline set by rescue authorities on Sunday morning.

Rain on Saturday evening and throughout Sunday was thought to be the catalyst for starting the rescue operation but appears not to have halted or significantly slowed its progress.

The extraction began at 10am on Sunday morning when 10 divers from an international team started making the 3.2km journey to the muddy slope where the boys have been sheltering.

They were joined by three more divers on Sunday afternoon and a team of rescue workers helping to run a rope system in more difficult stretches of the cave, as well as five Thai navy Seals.

Mr Osatanakorn had said Sunday morning was the most opportune time to launch the operation, citing the perfect weather, water and the children’s readiness, physical and mental.

“Today we are most ready,” Mr Osatanakorn said earlier on Sunday. “Today is D-Day,” he said. – Guardian service