May stands firm on soft Brexit amid resignations and Tory turmoil

July 9th, 2018: Theresa May has praised Boris Johnson and David Davis in a statement to the House of Commons following their resignations. Video: Parliamentlive.tv 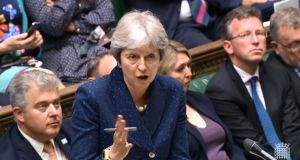 British prime minister Theresa May is working to shore up support for her Brexit strategy after the resignations of Boris Johnson and David Davis. Photograph: Getty Images

Theresa May was working to shore up support for her Brexit strategy last night following the resignation of Boris Johnson and David Davis, the two most high-profile Brexiteers in her cabinet.

The resignations came three days after the prime minister appeared to have united her cabinet behind a plan for a soft Brexit which will be published in detail later this week.

Mr Johnson said he could not remain as foreign secretary because the plan agreed at Chequers would leave Britain with “the status of colony” as it would have to follow EU regulations it had no role in shaping.

“Brexit should be about opportunity and hope. It should be a chance to do things differently, to be more nimble and dynamic, and to maximise the particular advantages of the UK as an open, outward-looking global economy. That dream is dying, suffocated by needless self-doubt,” he wrote to the prime minister.

“What is even more disturbing is that this is our opening bid. This is already how we see the end state for the UK – before the other side has made its counteroffer. It is as though we are sending our vanguard into battle with the white flags fluttering above them.”

The prime minister told Mr Johnson she was sorry “and a little surprised” to receive his resignation but said that if he could not support the government’s Brexit policy, he was right to go.

During a day of drama at Westminster, Mr Davis’s resignation as Brexit secretary was followed by that of his junior minister Steve Baker. Last night, two other junior ministers, Chris Green and Conor Burns, also resigned.

Ms May appointed Dominic Raab, a committed Brexiteer, to succeed Mr Davis but Downing Street made clear that the prime minister and her civil service Sherpa Olly Robbins would lead the negotiations with Brussels.

As backbench Brexiteers warned that they would vote against a Brexit deal based on the Chequers plan, No 10 ruled out making any changes to the proposal, pointing out that it was approved at a formal cabinet meeting. Officials briefed opposition MPs about the proposal on Monday but Jacob Rees-Mogg warned that any attempt to win approval for a Brexit deal with Labour votes would split the Conservative party.

“If the Government plans to get the Chequers deal through on the back of Labour party votes that would be the most divisive thing it could do and it would be a split coming from the top, not from the members of the Conservative Party across the country,” he said.

Ms May defended the Chequers plan in the House of Commons, telling MPs it was “the right Brexit” for Britain and that it would protect the interests of business while respecting the decision to leave the EU.

“What we are proposing is challenging for the European Union. It requires the EU to think again, to look beyond the positions that it has taken so far, and to agree a new and fair balance of rights and obligations. That is the only way in which to meet our commitments to avoid a hard border between Northern Ireland and Ireland without damaging the constitutional integrity of the UK and while respecting the result of the referendum,” she said.

The Government was reluctant to comment on the resignations in London, and sources said they didn’t want to do or say anything that made life any harder for the British prime minister. But privately senior figures welcomed the confrontation between Ms May and the hard Brexiteers, long anticipated in Dublin.

Though neither Mr Davis or Mr Johnson were greatly regarded in Dublin, their departure was taken as a sign that Ms May was seeking to push through a softer Brexit.

1 Prepare for six to nine months of Covid-19 restraints, warn health officials
2 Speed and distance of Covid-19 droplets tracked by Mater researchers
3 ‘Insane’ gathering of hundreds of students in Galway is condemend
4 Covid-19: Seventy cases in Cork traced to local pubs and restaurants in recent weeks
5 No joy for consumer with a faulty Husqvana chainsaw
Real news has value SUBSCRIBE