President plays down threat to US of widespread outbreak, saying risk ‘very low’ 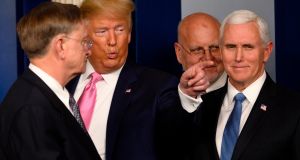 US president Donald Trump gestures at vice-president Mike Pence after speaking at a news conference on the Covid-19 coronavirus at the White House on Wednesday. Photograph: Andrew Caballero-Reynolds/AFP via Getty Images

President Donald Trump on Wednesday named vice-president Mike Pence to co-ordinate the US government’s response to the coronavirus, even as he repeatedly played down the danger to the United States of a widespread domestic outbreak.

Mr Trump’s announcement, at a White House news conference, followed mounting bipartisan criticism that the administration’s response has been sluggish and came after two days of contradictory messages about the virus, which has infected more than 81,000 people globally, killing nearly 3,000.

The announcement also came on a day when the US Centers for Disease Control and Prevention reported a person with no known risk factors had been infected in northern California.

“The risk to the American people remains very low,” Mr Trump said, flanked by top health officials from several government agencies. “We have the greatest experts, really in the world, right here.”

The president said he would accept whatever amount of money congressional Democrats wanted to give for the virus response, adding, “We’re ready to adapt and we’re ready to do whatever we have to as the disease spreads, if it spreads.”

“We’ll spend whatever is appropriate,” he said.

Several top healthcare experts at the news conference echoed Mr Trump’s optimism but also offered a more sober assessment of the future risks. Dr Anne Schuchat, principal deputy director of the CDC, warned Americans that there would be more infections.

“Our aggressive containment strategy here in the United States has been working and is responsible for the low levels of cases that we have so far. However, we do expect more cases,” she said as Mr Trump stood behind her. “The trajectory of what we’re looking at over the weeks and months ahead is very uncertain.”

About a half-hour later, Mr Trump contradicted Dr Schuchat’s assessment, telling reporters that “I don’t think it’s inevitable.” He left the door open to travel restrictions beyond China, to other hard-hit countries such as South Korea and Italy, and said his early decision to stop flights from China had held the virus at bay.

But the CDC confirmed minutes later that a new infection in California was contracted by a person who did not appear to have travelled to countries hard hit by the virus or been exposed to a known coronavirus patient. That raised the prospect that the virus was spreading through unknown means.

Health experts have questioned the CDC’s decision to limit testing for the virus to people who have travelled in China or have come into contact with someone who has. Other countries are testing more broadly for the coronavirus among people from countries where outbreaks have been growing, including Italy, Iran and South Korea.

Earlier in the day, Mr Trump had accused journalists of making the situation “look as bad as possible” even as government health experts warned that the coronavirus threat in the United States is only beginning.

Without offering any details on transmission, Alex Azar, the health and human services secretary, confirmed the new case on Wednesday afternoon, bringing to 60 the total number of infections that have been counted in the United States. Mr Azar said that health officials were still figuring out how the new person became infected.

She said that hospitals and schools should begin preparing for an outbreak, and that she had even spoken to her own family about “significant disruption of our lives”.

Mr Trump sought on Wednesday to counter that message with a much less dire one, holding up a Johns Hopkins University study that he said showed the United States as the most prepared country in the world to confront a virus. He said he was “amazed” that tens of thousands of people died from the flu each year, contrasting that number with the several dozen currently infected with coronavirus.

“We’re very, very ready for this, for anything, whether it’s going to be a breakout of larger proportions or whether or not we’re, you know, we’re at that very low level,” Mr Trump said.

The president, who is a well-known germaphobe, urged Americans to be vigilant about covering their coughs and washing their hands, and he told the story of a man who recently came up to him and hugged him. “I said, ‘Are you well?’ He says, ‘No,’” Mr Trump said. “He said, ‘I have the worst fever, and the worst flu.’ He’s hugging and kissing me. I said, ‘Excuse me,’ I went and started washing my hands.”

Mr Trump has been reluctant to give in to what he considers an “alarmist” view about the virus, an administration official said. The president has repeatedly said that, like the flu, the new coronavirus will dissipate with warmer, more humid weather, even though officials have warned him that relatively little is known about the virus, and it may not behave as others do. – New York Times