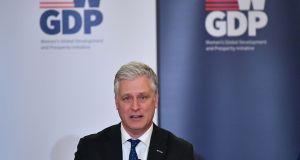 Robert O’Brien, the US national security adviser, says he has not “seen any intelligence that Russia is doing anything to attempt” to get the president re-elected. Photograph: by Mandel Ngan / AFP

Donald Trump’s national security adviser says he has not “seen any intelligence that Russia is doing anything to attempt” to get the president re-elected in November.

Robert O’Brien’s claim comes after it was reported that intelligence officials briefed the House intelligence committee that Russia was once again trying to help get Trump elected.

Reports of Mr Trump’s furious reaction to that news were followed by the departure of Joseph Maguire, the acting director of national intelligence, and his replacement by Trump loyalist Richard Grenell, formerly ambassador to Germany. The president has tweeted extensively on the subject, blaming Democrats and the media for “disinformation hoax number 7”.

It was also reported last week that Mr Trump, congressional leaders and Bernie Sanders were briefed that Moscow was repeating a tactic from 2016 and backing the Vermont senator in the Democratic primary.

Mr Sanders issued a statement telling Russia to stay out of US elections, then won convincingly in Nevada on Saturday.

Mr Sanders has described a 10-day visit to the then Soviet capital in 1988 as “a very strange honeymoon”.

Mr O’Brien continued: “President Trump has rebuilt the American military to an extent we haven’t seen since Ronald Reagan. So I don’t think it’s any surprise that Russia or China or Iran would want somebody other than President Trump.”

Asked if he had seen analysis showing a Russian aim in its election interference efforts was to help the president, Mr O’Brien said: “I have not seen that, and the national security adviser gets pretty good access to our intelligence. I haven’t seen any intelligence that Russia is doing anything to attempt to get President Trump re-elected. I think this is the same old story that we’ve heard before.”

Mr O’Brien said he was not making a distinction between seeing intelligence material and seeing analysis of it.

He also said Mr Grenell and CIA director Gina Haspel had not seen such material.

US intelligence concluded that Russia ran interference efforts through the 2016 election, aiming to boost support for Mr Trump against Hillary Clinton, who confronted Russia while she was secretary of state, and to stoke division in US society.

Mr Trump has rejected such conclusions, including standing with the Russian leader in Helsinki in July 2018 and saying: “I have President Putin. He just said it’s not Russia. I will say this. I don’t see any reason why it would be.”