Coronavirus: Woman tests positive for a second time in Japan 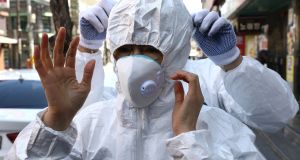 A woman working as a tour bus guide in Japan has tested positive for coronavirus for a second time, raising fears that the virus may remain dormant in those who contract it.

She is the first known person in Japan and one of very few worldwide to test positive a second time amid growing concerns about the spread of the infection.

The number of cases in Japan has now risen to more than 200 and the country’s primary and secondary schools will be asked to close from March 2nd until their upcoming spring break to help contain the coronavirus outbreak, prime minister Shinzo Abe said.

In Italy, which is a European epicentre of the illness, two more people were reported dead on Thursday bringing the death toll to 14.

In Iran, a state-owned newspaper said the country’s vice president Masoumeh Ebtekar has been infected with the coronavirus. Earlier this week Iran’s deputy health minister Iraj Harirchi, tested positive for the virus. Before the announcment he had appeared sweating profusely during a news conference on the coronavirus.

Two further patients in England have tested positive for coronavirus, bringing the total number of UK cases to 15, the Department of Health said on Thursday.

The virus was passed on in Italy and Tenerife to these patients who have been transferred to specialists at the Royal Liverpool hospital and the Royal Free hospital, London.

Though Ireland remains free of confirmed cases, widening concern over the threat posed by the virus has forced the cancellation of next month’s Ireland-Italy rugby games and may impact other mass gatherings, including the St Patrick’s Day festival.

There was confusion too among schools with students returning in recent days from ski trips in areas of Italy affected by coronavirus clusters. Some schools sent pupils who had been in Italy home for several days as a precautionary measure, while in other schools, students, assuming they were well, were required to attend classes.

The decision by Saudi Arabia to suspend arrivals by foreigners for the Umrah pilgrimage and tourists from some two dozen countries where the coronavirus has spread comes ahead of the holy fasting of Ramadan, which begins in late April this year, when visits by Muslims to the kingdom accelerate.

On Wall Street, major indexes were set for their steepest weekly pullback since the global financial crisis more than a decade ago as rising numbers of new infections outside China raised fears of a pandemic.

“Markets have come to realise that the outbreak is much worse and are now realistically pricing in the impact of the virus on the economy,” said Philip Marey, senior US strategist at Rabobank. “In that sense it’s a bit of a catching up from the relative optimism that was there in the beginning when markets thought [the virus] will be contained to China with some minor outbreak outside.”

The FTSE 100 leading index of UK companies has lost £152 billion in value in the past four days, over fears of the coronavirus outbreak. The index has fallen 8.2 per cent so far this week, shedding £62 billion on Thursday.

Meanwhile French president, Emmanuel Macron, warned on Tuesday an epidemic that is “on the way”. There are now 18 confirmed cases of coronavirus in France and two people have died.

China’s health authority has reported another drop in the number of new infections, with 433 new confirmed cases and 29 deaths.

The official death toll from covid-19 cases in Iran has increased to 22 people. Officials also said that 141 people have tested positive for the virus, but experts fear Iran is under reporting the true scale of the outbreak.

Saudi Arabia has barred foreign visitors going on pilgrimage or Umrah in the country although the country has not reported any cases of the virus.

As a result, Emirates airline says passengers from a number of countries - including China, Japan, Italy, Iran, India and Pakistan - won’t be allowed to fly with them to Saudi Arabia.

The virus has infected about 80,000 people worldwide and killed more than 2,800, the majority in China where the outbreak began in late 2019.

The number of new infections inside China was for the first time overtaken by new cases elsewhere on Wednesday, with Italy and Iran emerging as epicentres of the illness.

Australia initiated emergency measures and Taiwan raised its epidemic response level to its highest, a day after US president Donald Trump put his vice president, Mike Pence, in charge of the US response to the looming global health crisis.

Mr Trump has sought to play down the threat from coronavirus despite mounting concerns about unchecked worldwide contagion. In a press conference in Washington, the US president said the danger to Americans “remains very low” and predicted that the number of cases diagnosed in the country, currently on 15, could fall to zero in a “few days”.

The United States and South Korea have also postponed joint military drills to limit the spread of the virus, which has emerged far beyond China, where it originated late last year, apparently in a market selling wildlife in the city of Wuhan.

Stocks sunk deeper into the red, oil prices fell and US treasuries rallied into record territory as more signs of the global spread of the virus heightened fears of a pandemic.

Global markets have dropped for six straight days, wiping out more than $3.6 trillion (€3.2tn) in value.

The coronavirus has infected more than 80,000 people and killed nearly 2,800, the majority in China. Much remains unknown about the virus but it is clear the ramifications of the world’s second-biggest economy in lockdown for a month or more are vast.

The rapid spread of the virus in different places - notably Italy, Iran and South Korea - in recent days has met the definition for a pandemic, and raised alarm.

There is no cure for the virus that can lead to pneumonia, and a vaccine may take up to 18 months to develop.

There have been 3,246 cases outside China, including 51 deaths, according to a Reuters tally.

A number of countries have reported their first cases in the past couple of days with the latest being Denmark, in a man who returned from a ski holiday in Italy, and Estonia, in a man returning from Iran, media reported.

China reported 433 new cases on Thursday, against 406 a day earlier.

South Korea reported another 334 cases, pushing its total to 1,595, the most in any country other than China.

The US state department issued a new travel warning for South Korea after the US military reported on Wednesday its first case of the coronavirus, in a 23-year-old soldier based near the South Korean city of Daegu.

The South Korean military has also reported a number of infections and confined most troops to base.

A “command post training”, usually conducted by members of the two militaries’ combined forces command, will be postponed until further notice, the command said.

The outbreak has played havoc with international aviation with airlines cancelling flights as countries ban visitors from hot spots and nervous passengers put off travel plans.

News that a Korean Air flight attendant who worked on flights between Seoul and Los Angeles later tested positive, is likely to unnerve passengers further. – Agencies