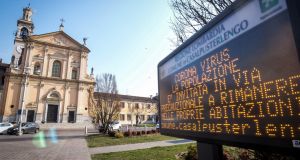 The Department of Foreign Affairs says it is “closely monitoring” developments in the coronavirus outbreak, following a sharp rise in cases outside China.

Irish airlines also said they were keeping a watching brief on Sunday after Italian authorities announced closures in the north of the country following a surge in the number of Coronavirus cases.

Austria suspended train services over the Alps to Italy for about four hours late on Sunday before restarting them after two travellers tested negative for coronavirus.

With Italy reporting three deaths, and South Korea a 20-fold increase in cases in five days, international concern is growing over the spread of the disease.

The first major travel restrictions to be imposed in Europe has seen more than 50,000 people in a number of towns in the Veneto and Lombardy regions of northern Italy quarantined. Italian officials have cancelled sporting events, closed schools and businesses and cut short the Venice carnival.

The Department of Foreign Affairs said it was updating its travel advice regularly to reflect developments in the outbreak. Its current travel advice for Italy notes the presence of cases in the country but does not offer any country-specific advice.

Ryanair and Aer Lingus both fly to Milan in Lombardy. Ryanair said that flights to and from Milan were continuing as normal.

Aer Lingus said that it was “monitoring the situation and following all guidelines from the relevant authorities in relation to this issue”.

Meanwhile, two Irish citizens have arrived at a quarantine block near Liverpool in England after being evacuated from the Diamond Princess cruise ship moored off Japan. They were among a group of 32 people – the rest of whom are British nationals – who arrived at the centre on Saturday. Four of the group have tested positive for coronavirus, according to British officials.

Across the world, the number of cases of the virus, Covid-19, has begun to mount. South Korea went on high alert after the number of infections surged over 600, with six deaths. Iran has reported 43 cases, with eight deaths.

A third fatality in Italy, on Sunday, was an elderly woman from the town of Crema, east of Milan, who was also suffering from cancer.

In China, which has seen the vast majority of cases, authorities reported 648 new infections – higher than a day earlier – but only 18 were outside of Hubei province, the lowest number outside the epicentre since authorities began publishing data a month ago and locked down large parts of the country. China has now relaxed restrictions on movements in several places including Beijing as its rates of new infections dropped. Yunnan, Guangdong, Shanxi and Guizhou provinces lowered their coronavirus emergency response measures from the most serious level, joining the provinces of Gansu and Liaoning to relax restrictions on movements. Excluding central Hubei province, the epicentre of the outbreak, mainland China reported 11 new cases, the lowest number since the national health authority started publishing nationwide figures on January 20th.

The Hubei capital of Wuhan, a city of 11 million people which has been under virtual lockdown for weeks, officials said healthy people would be allowed to leave the city for crucial operations only.

President Xi Jinping said that while measures to deal with the virus had been effective, the battle to contain it was still at a crucial stage. State run television urged people to avoid complacency, drawing attention to people gathering in public areas and tourist spots without wearing masks.

The virus has killed 2,442 people in China, which has reported 76,936 cases, and has cut growth in the world’s second-largest economy. Since January, it has spread to 26 countries and territories, with a death toll of about two dozen.

It has been fatal in 2 per cent of reported cases, with the elderly and ill the most vulnerable, according to the World Health Organisation (WHO), which said on Saturday it was worried by the detection of infections without a clear link to China.

The three airports that serve Milan, including Bergamo – where Ryanair has a base – continued their services as normal at the weekend.

Lombardy and Veneto said they would close schools for a week beginning on Monday while the affected regions postponed carnivals, football matches and fashion shows.–Additional reporting Reuters