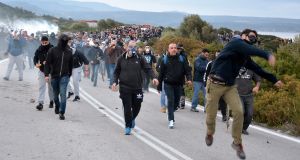 Demonstrators gathered for a fourth consecutive day on Thursday on the eastern Greek islands of Lesbos and Chios to protest against government plans to build new migrant detention centres.

The protest comes amid heightened tensions on the islands that have felt the full impact of migrant flows from war-torn Syria in particular. On occasion, the tensions between the island residents and police have turned violent.

Shops and services were shut on Lesbos as workers extended an initial 24-hour strike into a second day as part of the protests. The mayors of Lesbos, Chios and the nearby island of Samos were to meet with prime minister Kyriakos Mitsotakis in Athens to discuss the situation.

Protests on Wednesday descended into violence, with hundreds of demonstrators attacking police guarding the building sites of future migrant detention camps on Chios and Lesbos. A crowd also laid siege for hours to a Lesbos army camp where riot squads were staying.

Officials have said 43 police officers were injured in violence in Lesbos, and another nine in Chios, where a mob burst into a hotel being used by riot police and beat officers resting in their rooms.

The government has said it will pull out many of the riot police deployed to the islands earlier this week.

Greece’s eastern Aegean Sea islands have been the main entry point into the European Union for tens of thousands of people fleeing conflict and poverty in the Middle East, Africa and Asia. Under a 2016 deal between the EU and Turkey, new arrivals must stay on the islands pending deportation back to Turkey until their asylum applications are processed.

Long delays in the asylum process and increased migrant flows have led to severe overcrowding in the island camps, which are several times over capacity.

Island residents have demanded that all migrants be moved to the mainland, and vehemently object to new camps being built in their areas.

In Lesbos on Wednesday, locals engaged in hand-to-hand combat with police who were attempting to use teargas and stun grenades to disperse demonstrators gathered at the hilltop site earmarked for the new facility.

“Our great fear when passions are so high is that blood will be spilt,” said Eftratios Tzimis, the deputy mayor of Mytilene, Lesbos’s main town. “It’s a very bad turn of events when Greeks turn against Greeks.”

Small groups of protesters on Lesbos threw stones and firebombs at police, who responded with teargas and flash grenades.A day earlier, squads of riot police were sent to the islands with bulldozers and other heavy machinery to begin construction of installations that have infuriated communities who had previously exhibited extraordinary compassion towards refugees.

Despite the growing pandemonium, the centre-right government of Mr Mitsotakis vowed to press ahead with the plan.

Officials are acutely aware of the escalating violence in Syria, where rights groups are warning of a renewed humanitarian crisis in Idlib, the rebel-held province being targeted by Russian-backed regime forces. They fear it is only a matter of time before Greece faces an even greater influx of asylum seekers from Turkey.

In recent months there have been more arrivals than at any other time since early 2016, the height of the conflict, when nearly a million displaced Syrians entered Europe via the Aegean islands.

Close to 43,000 men, women and children are registered on Lesbos, Samos, Chios, Leros and Kos in camps originally designed to accommodate 5,400. No other corner of the continent is such a busy entry point for illegal migration into the EU.

“It is critical that these centres happen,” said Manos Logothetis, the general secretary of the Greek ministry of migration and asylum. “It is an honour for no state to have such centres,” he told state-run TV, referring to Moria, the notorious camp in Lesbos, and other vastly overcrowded open-air facilities that the government intends to replace with more streamlined, if restrictive, detention centres.

Once built, asylum seekers will be kept under lock and key at night in an attempt to bring order to an increasingly chaotic situation across the isles.

On Tuesday a government spokesman, Stelios Petsas, cited the coronavirus and the public health risk the camps would pose in the event of an outbreak as another reason for authorities wanting to accelerate construction plans.

But after years of being on the frontline of the crisis, island communities say they have had enough. “Personally, I don’t disagree with the government, or think its intentions are bad, but it has handled this very badly,” said Mr Tzimis, who is a member of the ruling New Democracy party.

“We understand that as islands on the route between Asia and Europe what is happening is partly an accident of geography but there is also a lot of distrust between us and government now,” he lamented.

“They promised to decongest our isles but instead have simply delayed. And now, when they should be persuading us on the merits of these new camps by dispatching high-level officials, they send in riot police and resort to repression.” – AP/Guardian