Trump may have backed himself into a corner over Iran 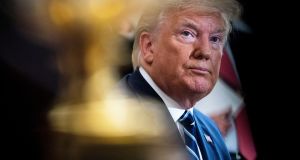 US president Donald Trump: his decision to pull out of the 2015 nuclear deal was always bound to have consequences. Photograph: Erin Schaff/The New York Times

The shooting down of a US surveillance drone by Iran this week and America’s equivocal response opens a new front in the increasingly tense standoff between Washington and Tehran.

For the first time a US aircraft – albeit unmanned – was taken down by Iran on Wednesday night, in international waters according to US officials. On Friday, US president Donald Trump confirmed that he stopped retaliatory air strikes with just 10 minutes to spare, out of concern that the response would be disproportionate.

The past 48 hours has brought Iranian-US relations to the brink. But in many ways it is the inevitable culmination of months of tension in the Middle East.

In early May the US dispatched an aircraft carrier and B52 bombers to the region, fuelling speculation that preparations for military engagement were under way. This was followed by the dispatch of 1,500 extra troops and a decision this week to send a further 1,000. The State Department also ordered non-essential staff from US diplomatic sites in neighbouring Iraq to leave the country.

US worries were heightened by mysterious attacks on four oil tankers in the Gulf of Oman in May, including two owned by Saudi Arabia, which blamed the attack on Houthi-rebels allied with Iran. But it was last week’s attack on two ships near the Strait of Hormuz, captured in photographs showing smoke erupting from one of the vessels, that significantly upped the ante.

The US unequivocally held Iran responsible, citing video footage allegedly showing an Islamic Revolutionary Guards Corps (IRGC) boat pulling up beside one of the tankers and removing an unexploded mine, an accusation rejected by Tehran.

This was followed by Iran’s announcement that it would breach the terms of its 2015 nuclear deal with world powers, by increasing its stock of uranium. It also hinted that it would increase its enrichment to a level that would bring it close to the capability needed to create a nuclear bomb.

Events escalated a few days later when Iran shot down an unmanned US drone in the Gulf of Oman. While Iran said it was operating in Iranian airspace, providing detailed co-ordinates to back up the claim, the Pentagon insisted it was in international air space at all times.

In many ways the events of recent weeks were predictable. Trump’s decision to pull out of the 2015 nuclear deal was always bound to have consequences.

The deal committed Iran to restrictions on its nuclear activities in return for an easing of sanctions. The crippling economic sanctions that have followed the US withdrawal from the deal, and growing public distrust of the US in Iran – even among some moderates – made it likely that Iran would renege on its side of the deal. This is despite efforts by EU signatories to keep the agreement on track by setting up a special purpose vehicle to allow companies to continue trading with Iran.

Hopes among some international observers that Tehran would be willing to sit out events in the hope that a new administration would assume power in Washington following next year’s presidential election appear to be misplaced. The shooting down of the US drone has marked an inflammatory escalation of tensions by the regime.

All eyes are now on Washington. Trump’s ambiguous response to the latest provocation is in keeping with his incoherent policy on Iran.

The US president has vacillated between ominous warnings that Iran will be “destroyed” if it harms the United States, to his assurances this week that everything would work out “fine”.

He has also been dealing with conflicting advice within his administration. National Security adviser John Bolton, who previously advocated bombing Iran, and secretary of state Mike Pompeo have been pushing for a robust military response to the Iranian threat. Others, including Trump, have been erring on the side of caution. A vacuum at the top of the Pentagon complicates matters.

Acting defence secretary Patrick Shanahan, who replaced Jim Mattis at the Pentagon last year, withdrew this week from the confirmation process to make his appointment permanent over a domestic violence accusation. Shanahan was known to have challenged the national security team under Bolton on its Iran policy, including opposing the decision to brand the IRGC as a terrorist organisation – a move that further provoked tensions with Tehran.

Trump’s equivocation about the next steps may suggest that he has backed himself into a corner. Having taken the US out of an international accord that succeeded in curbing Iran’s nuclear activities, he is now faced with an increasingly desperate adversary that has threatened to ramp up its nuclear capabilities.

War with Iran is not a favoured option for a president who campaigned on withdrawing US troops from the Middle East. The Iranian regime also presents a dangerous challenge to the US. Iran’s highly militarised society and its involvement in proxy wars in the Middle East from Yemen to Lebanon makes it a much more formidable enemy than, for example, Iraq or Afghanistan.

Possible diplomatic routes have so far come to nothing. Japanese prime minister Shinzo Abe travelled to Tehran last week with the blessing of the US to call for talks, but the trip proved fruitless. Iran on Friday said that if the US did not want war, it should ease sanctions – a signal that Tehran is unlikely to consider negotiations unless there is some move on sanctions.

But as the world saw with Trump’s Damascus moment with North Korea, anything is possible with the US president. In the meantime, US allies and adversaries in the Middle East will be nervously watching the next stage in the standoff, hoping that the tinderbox in the region does not erupt in flames.