Director resigns after tweet about boycott, divestment and sanctions movement 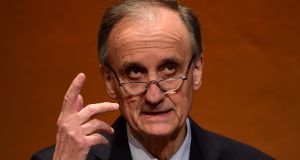 Director of the Jewish Museum in Berlin Prof Peter Schäfer: an open letter signed by 300 Jewish studies scholars has attacked the “calumnies” directed against “the first and greatest scholar of Judaism to emerge in postwar Germany”. Photograph: John MacDougall/AFP

With its zig-zag, zinc-clad facade, from above resembling a shattered Star of David, Berlin’s Jewish Museum has been a tourist magnet since it opened its doors in 2001.

Nearly two decades on, it’s attracting attention of another kind: it is dubbed the “Anti-Jewish Museum” after getting caught up in a cultural tug-of-war over Germany’s stance on Israeli politics and the Boycott, Divestment and Sanctions (BDS) movement.

Now the museum’s director has resigned after a controversial tweet about BDS, sparking a fresh row about how much – or little – criticism of Israel is allowed in German state institutions.

Since the BDS movement was formed in 2005, Germany has struggled to position itself on the campaign demands for a boycott of Israel until it withdraws from the occupied territories, removes the West Bank wall and allows the right of return to Palestinians.

Last month, the Bundestag passed a non-binding resolution declaring BDS anti-Semitic. The resolution said any calls to boycott Israeli companies, artists and products were at odds with Germany’s particular post-Holocaust responsibility for Israel, its security and continued existence.

“‘Don’t Buy’ stickers on Israeli products arouse inevitable associations with the Nazi-era phrase ‘Don’t Buy from Jews’,” as does corresponding graffiti on facades and windows, said the resolution, backed by the ruling coalition of centre-right Christian Democrats (CDU/CSU) and the centre-left Social Democratic Party (SPD), the opposition liberal Free Democratic Party (FDP) and some Greens.

The controversy crashed in on the Jewish Museum when, via its Twitter account, it recommended as a “#mustread” a German newspaper article about 240 Jewish and Israeli scientists criticising the Bundestag resolution.

The museum tweet quoted a line from them, but without quotation marks, making it appear that it was the museum saying that “the decision of parliamentarians doesn’t help further in the fight against anti-Semitism”.

That sparked outrage among Jewish organisations in Germany and the Israeli ambassador in Berlin dismissed it as “shameful”. Seeing a consistently anti-Israeli line in the institution, Uwe Becker, a regional anti-Semitism officer in the state of Hesse, remarked: “This is no Jewish museum, it’s an anti-Jewish museum.”

Museum director Prof Peter Schäfer, a respected Judaistic scholar, caused confusion in the subsequent days. He apologised for the tweet, and insisted the publicly funded museum neither supported BDS nor was a political actor. It primarily existed to explore Jewish history and culture in Germany, but he insisted it was also a place for contesting views on Israel.

“It’s not ‘Jewish’ in that we claim to be a Jewish institution that is the mouthpiece of the Jewish community . . . let alone the Israeli state,” he told Der Spiegel.

Responding to the controversial tweet, Dr Josef Schuster, president of the Committee of Jews in Germany, said: “Enough is enough.”

His organisation saw too little Jewish and Israeli perspectives in a recent exhibition, Welcome to Jerusalem – a view shared by Israeli prime minister Binyamin Netanyahu. The museum director was criticised, too, for meeting the Iranian embassy’s culture attaché, who drew parallels between Islam’s relationship to the Islamic State terror group and Judaism with Zionism.

Schäfer resigned last Friday but, rather than calming controversy, his departure has fanned the flames. Some see him as the latest victim of a crackdown on critical dissent that began in Israel and is now spreading worldwide.

Some 45 academic Talmud scholars signed a letter of support of Schäfer, who is Catholic. Another open letter, signed by 300 Jewish studies scholars, attacked the “calumnies” directed against “the first and greatest scholar of Judaism to emerge in postwar Germany”.

As the Jewish Museum debate rages on, controversy over the BDS and the Bundestag resolution hasn’t ceased.

US anti-Semitism researcher Prof Deborah Lipstadt suggested the museum “bungled” the BDS tweet, but said Schäfer’s contribution to Jewish studies was too important to have ended in resignation.

“I think the organisers and people behind BDS are absolutely anti-Semitic but I think there are people who think it is about legitimately trying to get Israel to change,” said Lipstadt, author of Anti-Semitism: Here and Now. “Even though I oppose BDS on principle I also believe in dialogue, and it frightens me that the room for difference and dissent is being made far too narrow.”

1 Black Lives Matter protest planned for Dublin is cancelled
2 Luke ‘Ming’ Flanagan bares his bottom half to European Parliament
3 With Lincoln looking on, the crowd dropped to their knees as 7pm approached
4 Covid-19: Harris urges people not to think it’s ‘mission accomplished’ ahead of next phase
5 Trinity College Dublin to resume with as much face-to-face teaching as possible
Real news has value SUBSCRIBE