Stakes raised as Blasey Ford agrees to testify against Kavanaugh

Republicans confident senator will be confirmed for supreme court despite allegations

US president Donald Trump has defended his supreme court nominee Brett Kavanaugh, who has been accused of sexual assault, saying that "it is very hard for me to imagine anything happened." Video: The White House 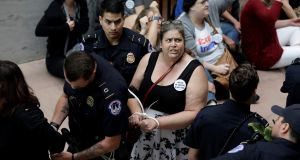 Protesters are arrested during a demonstration in Washington in opposition to US president Donald Trump’s supreme court nominee Brett Kavanaugh and in support for Dr Christine Blasey Ford, the woman who has accused Kavanaugh of sexual assault. Photograph: Yuri Gripas/Reuters

The woman who has accused US supreme court nominee Brett Kavanaugh of assault more than 30 years ago has said she will testify next week if the Senate judiciary committee offers her “fair” terms that assure her safety.

However, Christine Blasey Ford said that it was “not possible” for her to testify on Monday, claiming the date chosen by the committee for a hearing was “arbitrary”.

Her stance, outlined in a letter by her lawyers to the committee, significantly raises the stakes in the standoff between Ms Blasey Ford and the Republican-controlled committee.

Chuck Grassley, the Republican chairman of the committee, had sent a letter to Ms Blasey Ford’s lawyers on Wednesday giving their client until 10am (2pm Irish time) on Friday to submit prepared testimony if she intended to testify on Monday.

The controversy has threatened to derail his confirmation as a supreme court justice. Mr Kavanaugh is US president Donald Trump’s second nomination to the court, and his confirmation would give conservatives a majority on the US’s top court.

The latest development signals that Ms Blasey Ford’s lawyers are trying to negotiate with the Senate committee about the terms and scope of any possible hearing. It is not clear if she is prepared to testify publicly.

Her lawyers also reiterated that their client had a “strong preference” that “a full investigation” occurs before her testimony takes place.

Ms Blasey Ford’s lawyers have repeatedly called for an FBI investigation to be opened. While this has been ruled out by Republicans, Democrats have continued to argue that an investigation is needed.

“For this to be a fair, deliberate and open process, we need to let the FBI do its job and allow agents to conduct a full investigation of the allegations bravely brought forward by Dr [Blasey] Ford,” Democratic senator Chris Coons said on Thursday.

Earlier in the day, there was growing confidence among Republicans that Mr Kavanaugh’s confirmation process was back on track.

Mitch McConnell, the top Republican in the US Senate, said he was confident Mr Kavanaugh’s nomination to the court would be confirmed.

Meanwhile, protests took place outside Mr Grassley’s Senate office on Thursday, leading to arrests. Many of the protesters wore buttons with the words “I believe Dr Christine Blasey Ford”. Some of the protesters were survivors of sexual assault.

Ms Blasey Ford (51), a university professor based in Palo Alto, California, has accused Mr Kavanaugh of locking her in a bedroom, trying to take her clothes off and covering her mouth to stop her screaming at a party in Washington, DC in 1982. Mr Kavanaugh has strenuously denied the allegation.

Ms Blasey Ford’s lawyers have also argued that the Senate judiciary committee should not just call on Mr Kavanaugh and his accuser, but should also seek testimony from other alleged witnesses to the assault. Ms Blasey Ford said that Mark Judge, a friend of Mr Kavanaugh’s, was present in the room during the attack.

A writer and commentator, he has previously recounted his experiences with alcohol in a book called Wasted. Mr Judge said earlier this week in a letter to the Senate that he had no memory of the alleged incident.

“Brett Kavanaugh and I were friends in high school but I do not recall the party described in Dr Ford’s letter. More to the point, I never saw Brett act in the manner Dr Ford describes,” the letter states.

The Senate judiciary committee had initially been scheduled to vote on Mr Kavanaugh’s nomination on Thursday, but allegations by Ms Blasey Ford in an interview with the Washington Post on Sunday forced the committee to postpone the hearing.

“Chairman Grassley has done a masterful job, demonstrating firmness and fairness to all concerned, amidst attempts to hijack the nomination process by mob rule,” Senator John Cornyn, a Republican member of the committee, said on Thursday.