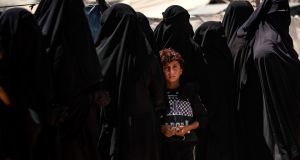 A boy stands in line with women to receive aid at the Kurdish-run al-Hol camp in northeastern Syria, where families of Islamic State foreign fighters are held. Photograph: Delil Souleiman/AFP via Getty Images

Syrian Kurds are planning the phased release of thousands of Syrians from a crowded camp in northern Syria where relatives of Islamic State fighters have been confined since March 2019.

“Syrian nationals will leave al-Hol camp and only foreigners will remain,” said Riyad Derar, co-chairman of the political wing of the US-fostered Kurdish Democratic forces which fought Islamic State on the ground while the US provided air cover. “Al-Hol camp is a big burden on the Kurdish administration,” he added.

The Kurds have been compelled to take action due to lack of funds to sustain the sprawling, squalid camp, water shortages, and outbreaks of Covid-19 for which treatment is not available.

Al-Hol hosts more than 64,000 people, including 24,400 Syrian women and children who were either captured or displaced by fighting during the anti-Islamic State campaign. Under pressure from local Arab tribes, 4,000 have been freed over the past 15 months after guarantees were given that they would not join Islamic State fugitives in Syria’s eastern desert.

It could, however, be difficult to control loyalist women determined to travel with or without children to unstable Druze-majority Sweida or Deraa provinces in the south of Syria to rejoin Islamic State.

According to a study of al-Hol released in July conducted by Vera Miranova for the Washington-based Middle East Institute, dedicated jihadi women depend on regular stipends from the group.

They could be expected to face abject poverty or punishment on release if they fail to return to Islamic State ranks. Women often acted as informers or enforcers of the group’s strict religious impositions.

More than 30,000 Iraqis comprise the largest number of non-Syrians while non-Arabs are estimated at 10,000. Iraqis are permitted to leave but their government is reluctant to receive them and many fear arrest. Abandoned by most home countries, many non-Arabs have little choice but to remain.

Relatives of non-Arabs who want to leave often pay large sums to smugglers to get them out of al-Hol. Some go to Syria’s northwestern Idlib province, which is ruled by al-Qaeda’s Hay’at Tahrir al-Sham, Islamic State’s rival, or to enclaves occupied by Turkey. Others travel to Turkey where they remain or attempt to go home.

The Kurds accuse Turkish intelligence of spiriting women and children out of al-Hol for payment by relatives or Islamic State. Four recent incidents involved women and children hiding in tanker trucks that delivered water to the camp.

The Kurds are also holding 10,000 Islamic State fighters, including 2,000 foreigners, in prisons across northeastern Syria. To exert pressure on other countries to repatriate them, the US announced last week it had returned 27 fighters and charged some with “material support of a designated terrorist group”.