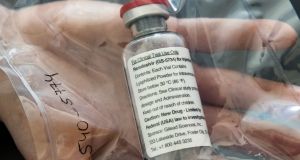 The root of the current shortage of remdesivir appears to be that, having approved the drug, the US then bought up 500,000 doses in July, before the EU managed to place its order. Photograph: Ulrich Perrey/Pool/AFP via Getty Images

As a second wave of Covid-19 sweeps the country, Dutch hospitals have run out of one of the key anti-viral drugs being used to treat the pandemic – and there are concerns that this could indicate the start of a Europe-wide shortage.

Those concerns are based on the fact that remdesivir – which reduces the recovery time of moderately ill patients with breathing difficulties and was given to US president Donald Trump during his hospital stay – is purchased centrally for EU countries by the European Commission.

Both the Dutch public health institute and the health ministry have confirmed that the drug is now out of stock despite talks about the worsening problem going on “for weeks” with the EU, which also distributes the treatment to member states.

In an unusually frank comment, a spokesperson for the health ministry described the commission’s failure to manage supplies in an ongoing crisis situation as “very annoying”.

Asked if it was the ministry’s understanding that other EU countries were now facing the same shortage, the spokesperson could only say that that remained “unclear”.

Remdesivir was originally developed by the American pharmaceuticals giant Gilead to treat Ebola. It was approved for emergency use in treating Covid-19 in May in the United States, and the following month in the European Union.

A phase 3 clinical trial showed that patients with moderate Covid-19 infections who received a five-day course of remdesivir – as Mr Trump did – were more likely to get better after 11 days than those receiving standard treatment. The trial showed it also helps patients with pneumonia.

The root of the current shortage appears to be that, having approved the drug, the US then bought up 500,000 doses in July, before the EU managed to place its order – and this has made it considerably more difficult to source in the rest of the world.

Doctors in the Netherlands insist they are not yet alarmed at the shortage of the virus inhibitor, which they say could be “unpleasant” rather than “a disaster”. They don’t know how long it will last.

“This drug doesn’t save lives, but it does reduce the length of time patients spend in hospital, which is good for them and for the hospital system,” said Dr Mark de Boer, an infectious diseases specialist involved in drawing up the national coronavirus treatment guidelines.