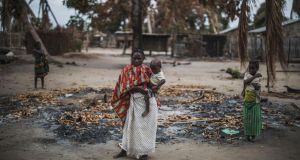 A woman holds her younger child while standing in a burned out area in the recently attacked village of Aldeia da Paz outside Macomia, Mozambique. Photograph: Marco Longari/AFP

Mozambique’s request to the European Union for support to tackle a growing Islamist insurgency has raised questions about the role some of southern Africa’s former colonial powers could play in a crisis that threatens regional stability.

Attacks in the gas-rich Cabo Delgado, Mozambique’s northernmost province, first began in 2017. But the violence has escalated dramatically this year, with insurgents brutally killing civilians and ambushing military and other key targets with frightening regularity.

Until April this year, Mozambique’s government maintained the situation in the restive province was under control, but the jihadists’ repeated occupation of important towns has shown that the government’s troops and strategy are struggling to keep the insurgents at bay.

Ahead of a Southern African Development Community (SADC) summit in May, President Filipe Nyusi asked the region’s main intergovernmental body for help to deal with the rebellion.

Despite the urgency of the situation, SADC’s approach to the conflict has been apathetic so far, even though Mozambique assumed its chairmanship in August.

Only South Africa has tentatively offered to assist its neighbour militarily. This was dependent on Mozambique developing a detailed action plan that had yet to materialise, according to its minister of international relations and co-operation, Naledi Pandor, last month.

In the face of SADC’s inaction, Mozambique has relied on international mercenaries to help fight the militants – first the Wagner Group, a Russian military security contractor, and more recently the Dyck Advisory Group, a South African security company.

But last month the EU confirmed it had also received a letter from Mozambique’s foreign ministry asking for military training for its armed forces and medical and humanitarian support.

A spokesperson for the EU delegation in Mozambique told The Irish Times its officials are assessing its options to assist Portugal’s former colony. However, security analysts have said that any military assistance the EU were to offer Mozambique could cause major regional tensions if not approached correctly because of the region’s colonial past.

This is especially true, they said, if the military training that Nyusi’s government has requested is provided directly through it rather than SADC.

According to the United Nations, Cabo Delgado’s insurgency has left at least 1,500 soldiers, militants and civilians dead and internally displaced at least 300,000 people to date. In recent weeks refugees have also fled into Tanzania to escape the violence, the UN has said.

The militants, known locally as al-Shabaab (“the youth”), claim to be affiliated to the Islamic State terror group. But most of its fighters are said to be disaffected young men from the province, which has historically been neglected by the government.

A senior researcher with South Africa’s Institute of Security Studies, Liesl Louw, said southern Africa’s fight to end colonial rule during the last century, which was supported by communist Russia and Cuba, has made it the least receptive region of the continent to western military interventions.

“We don’t know yet how the EU will respond, but the situation shows how weak SADC is and the competing priorities that exist between its member states,” she said.

“If the EU were to directly help Mozambique, that would definitely raise regional tensions,” Louw added.

“The best-case scenario is the deployment of a SADC force to Cabo Delgado that the EU supports financially.”

“If it did, the EU would be seen as steam-rolling SADC’s mandate and intentionally undermining its position in the region,” said Opperman, an analyst at the Armed Conflict Location and Event Data Project, a non-profit organisation that provides information on conflict patterns.

Portugal has already backed EU support for Mozambique, while France may also be open to helping, given its multinational oil and gas company Total SE has a large stake in a $20 billion (€16.9 billion) offshore liquified natural gas project in Cabo Delgado that is due to be completed in 2024.

However, the EU’s decision has been complicated by allegations made by international rights groups that Mozambican soldiers have carried out extrajudicial killings of civilians and captured militants in the province.

Mozambique’s government has denied its troops are committing atrocities. But were the allegations proved true, any EU deployment to train these troops could be seriously compromised.