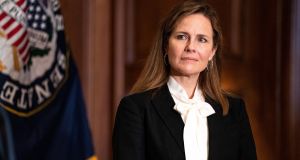 Judge Amy Coney Barrett: the announcement of her nomination at the White House on September 26th has been called a ‘super-spreader’ event. Photograph: Anna Moneymaker/AFP via Getty Images

As Donald Trump’s Covid-19 diagnosis and triumphant return to the White House after three nights in hospital continued to absorb political life in Washington, on the other side of Pennsylvania Avenue the Covid-19 outbreak was also having repercussions.

The network of people infected at the nomination ceremony for Judge Amy Coney Barrett at the White House on September 26th includes at least two Republican senators.

Thom Tillis of North Carolina and Mike Lee of Utah – who was caught on camera bear-hugging guests at the ceremony – have tested positive. A third senator, Ron Johnson of Wisconsin, has also contracted Covid-19, while others are self-isolating. Further, Tillis and Lee serve on the Senate judiciary committee which oversees supreme court nomination hearings.

Following news of the infections, Senate majority leader Mitch McConnell suspended Senate business for two weeks (the House of Representatives had already been adjourned until after election day). But he vowed to proceed as planned with the judiciary committee hearing for Barrett next Monday.

The move has sparked fury among Democrats – and has made the numbers a whole lot tighter for McConnell. Given that two Republican senators – Susan Collins and Lisa Murkowski – have already said they may not support a nominee before the election, he has a majority of just one when the full vote is held in the 100-member Senate.

But even before then, Barrett must clear the committee stage. Senate judiciary chairman Lindsey Graham has pledged to begin four days of hearings as planned on October 12th.

But Senate minority leader Chuck Schumer and the 10 Democrats on the 22-member committee have cried foul. “If it’s too dangerous to have the Senate in session it is also too dangerous for committee hearings to continue,” Schumer said. Ironically, McConnell himself resisted virtual voting in the Senate, despite the pandemic.

Democrats on the committee have also argued that a virtual session is “not an adequate substitute” for an in-person hearing, particularly given the weighty matter of a lifetime appointment to the supreme court.

Democrats have a possible tool in their arsenal. The 10 Democratic members could demand a quorum vote. Under Senate rules, the nomination of a supreme court candidate cannot go to the Senate floor without a majority of committee members being “actually present” to vote.

If at least two Republicans were physically absent because of coronavirus, it could provide an opening for Democrats to keep the nomination at the committee stage. However, the two infected Republicans on the committee, Tillis and Lee, have said they expect to be able to participate in an in-person hearing because they have already begun to quarantine. Ron Johnson said he will vote in person even if he has to vote “in a moon suit”.

Either way, the key votes on Coney Barrett’s nomination are likely to take place in the final two weeks of the presidential election campaign – an unprecedented event in American history, which never witnessed a supreme court vote so close to election day.

Although Barrett tested negative last Friday (she reportedly contracted the virus earlier this year), the Covid pandemic has introduced a new twist to her already contentious nomination.

The jubilant White House event that was supposed to mark her almost certain appointment to the supreme court will now go down in history as a “super-spreader” gathering that led to a wave of infections at the highest level of government.

The infections among senators have also drawn attention to the remarkably relaxed Covid procedures in the legislative body. While masks are obligatory in the House of Representatives’ chamber, they are not required on the Senate floor. Further, there is no official testing or contact-tracing system in place on Capitol Hill.

As the numbers of those infected rise, these are worrying times for the staff and constituents of the 535 members of Congress.