The Irish Times view on a US election race in turmoil

Coronavirus in the White House 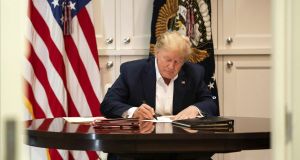 Even while Boris Johnson was in intensive care during his April bout of Covid-19, Downing Street was assuring the public that he was in “good spirits”. The move to hospital was merely “precautionary”. US president Donald Trump’s aides have been singing off the same hymn sheet. The president himself insisted in a video that “I feel much better now”, although his doctors were yesterday admitting “we’re not out of the woods yet”.

This is the president who previously admitted that he had deliberately played down the severity of the pandemic to “prevent panic”. He continues to do so – on its scale, the imminence of a vaccine, the necessity for mask wearing, the sabotage by rivals and scientists. All are woven into dangerous narratives of conspiracies and denialism. Hours before his diagnosis, Trump claimed in a pre-recorded speech that “the end of the pandemic is in sight, and next year will be one of the greatest years in the history of our country”.

All we can say with certainty is that we do not know how ill the president is but that, unfortunately, Donald Trump has indeed joined the more than seven million other Americans who have contracted the virus. More than 200,000 have died, many of them over 65. Trump is 74. Hopefully he will enjoy a speedy recovery.

Trump is the third world leader, after Johnson and Brazil’s Jair Bolsonaro, to come down with the virus. And it is no coincidence that each of them, in differing degrees, publicly recklessly played down the need for personal protection and social isolation.

Two events in the past week – a crowded ceremony in the White House Rose Garden to announce his nomination of Amy Coney Barrett to the supreme court, and a meeting in Bedminster, in New Jersey, to schmooze 19 Republican fundraisers – appear to have acted as “superspreader” events. In the course of 48 hours, the president, his wife, his campaign manager, his party chairwoman, his senior adviser, his assistant, his former counsellor, his debate coach and three Republican senators all tested positive for the virus, along with three White House reporters.

In an Irish context, attending the Oireachtas Golf Society dinnerhas rightly been viewed as a resigning matter. Above all, because such behaviour critically undermines the key anti-pandemic message of collective, shared endeavour. By contrast, the White House and the Republican leadership felt it could behave as if there was no pandemic at all, or at least that the worst of it was over – a myth on which the entire Trump campaign is predicated.

Doctors suggest it may be up to 10 days before Trump’s prognosis is clear. In the interim, as it faces into a defining election, the world’s only superpower enters a period of deep political and constitutional uncertainty.