America Letter: For how long will US president’s methods keep him above law? 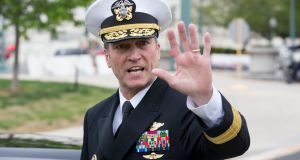 US navy rear admiral Ronny Jackson, Donald Trump’s nominee to be secretary of veteran affairs: will not return to job as his personal physician. Photograph: Michael Reynolds/EPA

To lose one doctor may be regarded as a misfortune, but to lose both...

This week Donald Trump’s personnel problems took a surreal turn. Amid the myriad controversies that assailed his presidency, it emerged that two of his closest medical aides were no longer working for him.

On Monday, the White House confirmed that Ronny Jackson, the embattled White House doctor who was forced to withdraw his candidacy for veteran affairs secretary, was no longer the president’s personal physician.

The photogenic admiral shot to global fame when he delivered a remarkable report card on Trump’s health at a press conference in January. So impressed was Trump at his doctor’s abilities that he nominated Jackson to succeed David Shulkin at the department of veteran affairs.

Just as the Jackson controversy was abating, Harold Bornstein, Trump’s long-serving personal doctor, emerged from recent obscurity to allege that he had been threatened by three men, including Trump’s lawyer and bodyguard, at his office last February.

Bornstein, who was the president’s personal physician for 36 years, said that after revealing in a newspaper interview that Trump took a drug to promote hair growth, he was subjected to a “raid” at his Manhattan office and all the files relating to the president were seized.

In a follow-up interview, the shaggy-haired physician said Trump had dictated a letter he wrote during the presidential campaign which claimed that Trump would be “the healthiest individual ever elected to the presidency”.

Whatever about the assertions and counter-assertions swirling around both men, the bottom line for both is that neither is now working for the president, despite their loyalty to him.

The past few weeks have seen a string of people who once had the president’s counsel locked out of his orbit.

As well as the departure of senior officials including Rex Tillerson as secretary of state and national security adviser HR McMaster, members of Trump’s legal team have headed for the door, including John Dowd and Ty Cobb.

Rumours abound that chief of staff John Kelly could be next, amid reports that he described the president as an “idiot” and “unhinged”.

In their place, new faces have arrived on the scene, such as Bush-era foreign policy hawk John Bolton and former presidential candidate and long-time Trump friend, Rudy Giuliani, who waded into controversy this week.

But how long they will last in the Trump White House is uncertain.

The plight of Trump’s longstanding lawyer Michael Cohen offers a salutary lesson in how far Trump’s loyalty goes. Following an FBI raid last month, Cohen went to court seeking to limit investigators’ access to documents. A special master has now been appointed by the court to sieve through the documents and assess what files can be handed over to investigators, buying Cohen and Trump time.

But last week, during a phone-in interview with Fox News, Trump seemed to distance himself from his long-time lawyer, claiming that he handled only a “tiny, tiny fraction” of his legal work. In a surprise move, the influential National Enquirer, owned by the president’s close friend David Pecker and which reportedly has paid off sources to quash anti-Trump stories, splashed on its front page with an exposé of Cohen’s “secrets and lies”. Many saw the hand of Trump in the story.

In his recent book, fired FBI director James Comey describes how dealing with Trump reminded him of his previous work prosecuting Mafia bosses in New York. “The silent circle of assent. The boss in complete control. The loyalty oaths. The us-versus-them worldview. The lying about all things, large and small, in service to some code of loyalty that put the organisation above morality and above the truth.”

As the Mueller investigation into Russian interference in the 2016 election deepens and Trump battles possible allegations of obstruction of justice, it remains to be seen if his way of doing business will keep him above the law.

What does seem certain is that in the power dynamics of Trump’s world, his daughter Ivanka, who continues to occupy a senior role in the White House, and his son Donald Trump jnr, who attended a disputed June 2016 meeting with Russian contacts in Trump Tower, will be protected, whatever the cost.