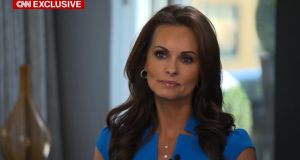 Trump sex allegations: Karen McDougal, the former Playboy Playmate who says she had an affair with the president, talking to Anderson Cooper on CNN

This week saw a return to the high-octane politics and rapidly changing news agenda that have become familiar tropes of the Trump presidency.

Donald Trump’s Twitter rants against special counsel Robert Mueller, the special counsel investigating Russian meddling in the 2016 US presidential election, culminated in the resignation of the president’s main defence lawyer in the inquiry, John Dowd. On Thursday the president announced on Twitter that he was replacing his national-security adviser, HR McMaster, with John Bolton. In an intriguing sideshow the president became embroiled in a war of words with Barack Obama’s vice-president, Joe Biden, that saw both septuagenarians bragging about how they could beat each other in a fist fight.

But amid the chaos that has become the new normal under Trump, another story emerged this week that could cause most damage to his presidency. Allegations of sexual impropriety that have swirled around the president since the election campaign have been gathering pace in recent weeks.

The highest-profile case is that of Stephanie Clifford, an adult film star better known as Stormy Daniels. She alleged she had an affair with Trump in 2006 and 2007, while he was married to his current wife, Melania. Although Trump has denied the allegations, his long-term lawyer Michael Cohen paid Daniels $130,000, or about €105,000, from his own funds days before the 2016 election. Daniels says a confidentiality agreement she signed at the time is invalid, as the president never signed it. A widely anticipated hour-long interview with Daniels is to air this Sunday on CBS.

A second allegation centres around Karen McDougal, a former Playboy model, who claims to have had an affair with Trump around the same time, and who outlined the details in an interview on CNN this week. She is suing American Media, Inc, the parent company of the National Enquirer, the influential gossip magazine. McDougal claims the company secretly consulted Cohen when it agreed to pay her $150,000 to buy her story but not print it, a practice known as catch and kill. In return the publication offered to run fitness articles by McDougal but failed to follow through, she says. She is suing to be released from the 2016 agreement, arguing that it is invalid. American Media’s chairman and chief executive, David Pecker, is a close friend of Trump’s.

The third controversy involves a former contestant on Trump’s reality-TV show, The Apprentice. Summer Zervos is suing Trump for defamation, after the president accused her of lying about allegations of unwanted sexual advances.

This week a New York judge ruled that the lawsuit could proceed, despite lawyers for the president arguing that the suit should be deferred until Trump is no longer president. The judge cited the Paula Jones case against Bill Clinton, when the US supreme court ruled that the sexual-harassment case could proceed against a sitting president.

The worry for Trump is that this week’s judgment has paved the way for lawyers to subpoena Trump-campaign records relating to his accuser and to seek depositions from other possible accusers.

The convergence of three sexual-harassment cases is adding to the president’s legal headaches as the Mueller investigation continues. They echo the sex scandals that shrouded Clinton’s presidency and eventually prompted the United States Congress to launch impeachment proceedings against him. But even if the Trump cases do not approach the levels of transgression that led investigators to the doors of the Clinton Oval Office, after the president lied about sexual relations with Monica Lewinsky, an intern, the deepening scandals spell trouble for the current president.

With Trump struggling in the polls, his support among women voters is likely to take a dive following the latest accusations. In the wake of the #MeToo movement, Trump has managed to escape censure, despite more than 10 women coming forward to accuse the billionaire businessman of harassment or assault during the presidential campaign. The latest scandals could place renewed focus on Trump’s relationship with women at a time when voters are showing little tolerance for tales of sexual misconduct.

Perhaps the biggest giveaway that the issue is looming large for the president is his uncharacteristic silence on the topic. Never one to shy away from rebuttal or attack on Twitter, Trump has been curiously quiet on this issue. That, more than anything, may be a sign that this time Trump is facing a battle he may not win.