America Letter: distinctly Irish theme to the week in Washington 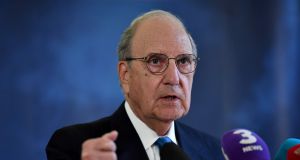 George Mitchell at an event to mark the 20th anniversary of the Belfast Agreement at Queen’s University, Belfast, on April 10th, 2018. Photograph: Charles McQuillan/Getty Images

Donald Trump was out of town this week, escaping to Mar-a-Lago in Florida to sit out the political controversies that continue to engulf his presidency. In Washington, there was a distinctly Irish theme to the week with a number of events taking place across the city.

On Tuesday, Druid Theatre company’s production of Samuel Beckett’s Waiting for Godot opened at the Lansburgh Theatre in central Washington. The searing, bleakly funny production of Beckett’s masterpiece opened to a packed crowd, with director Garry Hynes in attendance. The play – lauded by many as the best Godot production in a quarter of a century – runs for five weeks in Washington before moving on to Chicago.

On Wednesday, Georgetown University held a one-day symposium to mark the 20th anniversary of the Belfast Agreement. Georgetown is one of the oldest universities in the country, founded in 1789 just as the United States was establishing its independence.

Overlooking the upmarket, tree-lined suburb of Georgetown just west of the city, the university has long been an enclave of intellectual learning within a city obsessed with the relentless drive of politics. It also has strong Irish connections. Founded by Irish-American John Carroll, the first Catholic bishop in the United States, it became the country’s first Catholic Jesuit university.

It has not been without its controversy, however. Like many institutions in the United States, Georgetown has been grappling with its past connections with slavery. The university was financed in part by Jesuit slave plantations in Maryland. In 1838, faced with financial ruin, the Jesuit leadership of the university sold 272 slaves to keep Georgetown afloat.

The legacy of history and the lessons of the past were the main themes in a different context at Wednesday’s symposium on the Belfast Agreement.

Congressman Bruce Morrison and senator George Mitchell were among those who spoke at the event, which was organised by the university’s Global Irish Studies Initiative, a new programme developed over the past two years and a welcome addition to Irish studies programmes offered by dozens of universities across the United States.

Participants heard about the achievements but also the challenges that face Northern Ireland 20 years after the landmark agreement.

Mitchell spoke eloquently of the impact his time as Northern Ireland envoy had on his life. As he recalled how he was faced with a walkout as he chaired his first meeting in Belfast, he underlined how far the two sides had come to negotiate a peace deal, arguing that however problematic challenges are at the moment they are nothing in comparison to the momentous political challenges that faced the region 20 years ago.

He said he hoped that today’s leaders displayed the same “vision and courage that the leaders of Northern Ireland showed in 1998”.

The question of US involvement in the process was also a central theme of the day. The US state department’s Robert J Faucher told the conference that the United States remained committed to Northern Ireland despite the rapidly changing developments in the state department following the firing of Rex Tillerson.

Asked if a Northern Ireland envoy to the United States will be appointed as the state department awaits a new secretary of state – most likely to be CIA director Mike Pompeo – Faucher said that the process was in train, though officials stressed that no imminent decision was expected.

One of the most powerful contributions to the session was from a panel of three young Northern Irish people who spoke of the impact of the Belfast Agreement on their lives.

Belfast native and Georgetown student Francesca Drumm reminded the audience that only 7 per cent of students attended integrated schools in Northern Ireland, while parts of Belfast were some of the most socially deprived areas in Europe.

Claire Rumpsa of the Washington Ireland Programme spoke of her dreams of making Northern Ireland the best place in the world to live and bring up a family.

Matt Torney, associate artistic director of Studio Theatre in Washington, spoke of the need to move beyond politics in discussions about Northern Ireland and Northern Irish identity, arguing that art could offer a space for ambiguity and dialogue that partisan politics sometimes does not allow.

With US perspectives on Northern Ireland often rooted in the past, this week’s symposium was an important reminder of the value of looking at and revisiting a subject 20 years on, and reacquainting a new generation with the realities of peace in Northern Ireland.