WikiLeaks founder is fighting extradition to US to stand trial on spying, hacking charges 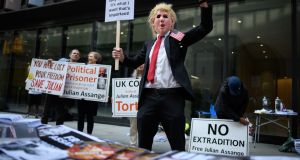 Associates of Donald Trump told Julian Assange the US president would pardon the WikiLeaks founder if he revealed the source for the hacking of the Democratic National Committee emails in the run-up to the US presidential election in 2016, a London court was told.

Mr Assange is fighting extradition to the US to stand trial on espionage and computer-hacking charges relating to the 2010 publication of a huge cache of classified government documents. A London court is hearing arguments from his legal team about why he should not be extradited.

The sworn-in witness testimony, which repeats allegations made by Mr Assange’s legal team in pre-trial hearings earlier this year, is designed to bolster his line of defence that the Trump administration’s pursuit of the WikiLeaks founder is politically motivated. Mr Assange’s lawyers say the US prosecution reverses a 2013 decision not to prosecute him, made by former US president Barack Obama.

Jennifer Robinson, a barrister acting for Mr Assange, on Friday testified that in August 2017 she and Mr Assange met former congressman Dana Rohrabacher and Charles Johnson, a Trump associate, in the Ecuadorian embassy in London, where he was in hiding.

At the time Mr Trump and his campaign team were being investigated by Robert Mueller, US special counsel, for their possible involvement in Russian interference in the 2016 US election.

“Congressman Rohrabacher and Mr Johnson made clear that they wanted us to believe they were acting on behalf of the president,” Ms Robinson said in a statement read out during Mr Assange’s extradition hearing at Westminster magistrates’ court on Friday. “They stated that President Trump was aware of and had approved of them coming to meet Mr Assange to discuss a proposal – and that they would have an audience with the president to discuss the matter on their return to Washington DC.”

The US congressman told Mr Assange he wanted to end the “ongoing speculation” about Russian involvement in a leak of documents stolen from the US Democratic Party and published by WikiLeaks during the 2016 US presidential election, Ms Robinson said.

Mr Rohrabacher told them he was meeting with Mr Assange to talk about “what might be necessary to get him out” and presented what he called a “win-win” solution that “could allow Mr Assange to leave the embassy and ‘get on with his life’ without fear of a US indictment and extradition request”, Ms Robinson testified.

Mr Rohrabacher wanted Mr Assange to identify the source of the DNC leaks in return for a pardon that “would both benefit President Trump politically and prevent US indictment and extradition”, Ms Robinson added. Mr Assange did not disclose the source, she said.

The White House and Mr Rohrabacher did not immediately respond to emails seeking comments on Friday. In February they denied that Mr Trump had offered Mr Assange a pardon. “At no time did I offer Julian Assange anything from the president because I had not spoken with the president about this issue at all,” Mr Rohrabacher said then.

Mr Assange faces one count of computer hacking and 17 allegations of violating the 1917 Espionage Act. The charges carry a maximum jail term of 175 years, though Mr Assange would be likely to receive a shorter sentence. The hearing continues. – Copyright The Financial Times Limited 2020