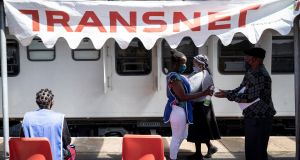 President Cyril Ramaphosa’s decision to return the country to near normality has come two months after it was recording up to 15,000 confirmed Covid-19 cases each day, which raised fears that some hospitals would be overwhelmed by patients.

However, on Wednesday Mr Ramaphosa told citizens that South Africa was moving to alert Level 1 of its five-stage risk-adjusted lockdown because medical facilities had enough capacity to manage the nation’s current Covid-19 infection levels.

On Wednesday health minister Dr Zeli Mkhize revealed that Covid-19 antibody studies conducted locally suggested that more than 20 per cent of the country’s 58 million population had contracted the virus so far.

For instance, Mexico has a similar infection rate to South Africa, with 684,113 confirmed cases as of Friday, but its death rate stands at 72,179. The UK, with 384,087 infections, has nearly three times South Africa’s death rate.

The fact that 50 per cent of South Africans are below 27 years of age has been touted as one of the factors contributing to the low death rate, as has the country’s warm climate.

But a theory gaining traction with virus experts is that people living in high-density areas have acquired a level of immunity to severe Covid-19 infection from their reoccurring exposure to other coronaviruses that spread in their communities in the past.

Mr Mkhize said that the recent drop in daily detected infections “raises the question of the level of immunity that may already be existing in society”.

Under the Level 1 lockdown South Africa will open its borders to the world from the beginning of next month, but people entering the country must have a negative Covid-19 test result that is not older than 72 hours.

Travel to and from many countries will be limited, however, as only one land border post and three airports – O R Tambo in Johannesburg, King Shaka in Durban and Cape Town International – will be open to international travellers.

In addition, a night-time curfew, which ran from 10pm to 4am, has been shortened by two hours, the times when alcohol may be sold has been extended, and venues for social and religious gatherings can now utilise half their normal capacity.