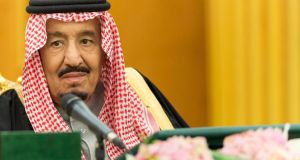 Saudi Arabia has told the US that Israel must withdraw from conquered Arab territory and Palestinians must have their state before the kingdom will normalise relations with Israel.

In a phone call with US president Donald Trump, King Salman said unless these two conditions are met, Saudi Arabia will not follow the Emirates, which last month became the third Arab state to establish diplomatic and economic ties with Israel.

Other Arab rulers appear to be following the Saudi line.

To appease Trump, the king has agreed to allow flights between the Emirates and Israel to overfly Saudi territory.

King Salman remains committed to the Saudi-authored peace plan adopted by the 2002 Beirut Arab summit. The plan pledges full normalisation with Israel in exchange for full Israeli withdrawal from occupied Palestinian territory and the Syrian Golan.

Furthermore, the king seems to have toughened the Saudi position by referring specifically to plan provisions on Palestine. These call for a “just solution to the Palestinian refugee problem” in accordance with UN resolutions and the “establishment of a Sovereign, Independent Palestinian State on the Palestinian territories occupied since June 4th 1967 in the West Bank and Gaza strip, with east Jerusalem as its capital.”

The plan has been reaffirmed by subsequent Arab summits and has been a template for the “land-for-peace” approach adopted by Palestinians and the international community but rejected by right-wing Israeli governments.

Although the monarch’s son Mohammed (34) was named crown prince and has assumed control of most of the kingdom’s affairs since 2015, King Salman (84) has retained the Palestine file and followed the example of his father, Abdel Aziz bin Saud, founder of the kingdom.

If the Saudis want to maintain respect as guardians of Islam’s holy cities, Mecca and Medina, they cannot submit to pressure from the Trump administration.

Opinion polls in Arab and Muslim countries reveal that 75-80 per cent of respondents reject relations with Israel before Arab demands are met.

Prince Mohammed has waged a stalemated war in Yemen, been blamed for the 2018 assassination of Saudi journalist Jamal Khashoggi, and has detained scores of Saudi dissidents, including senior princes.

If the crown prince assumed responsibility for Palestine policy it could mean capitulation to Trump’s son-in-law Jared Kushner, who has assiduously courted him.

Kushner’s Middle East peace plan grants Israel its demands while proposing a less than sovereign Palestinian entity in West Bank enclaves and Gaza. Palestinians have rejected the plan out of hand.

In 1979 Egypt was ostracised by the Arabs by becoming the first Arab country to make peace with Israel. Jordan agreed in 1994 after Palestinians and Israelis launched the Oslo peace process which, the Arabs believed, could result in the emergence of a Palestinian state.