Michael McDowell: Trump is a moral monster and a danger to humanity

US president threatens democracy as he follows playbook of Putin, Xi and Saudis

Donald Trump has once again chastised a journalist for wearing a face mask while asking the US president a question at a press conference. Video: C-Span/The White House 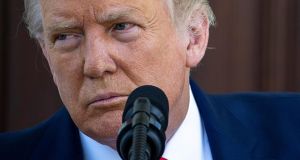 When Jamal Khashoggi entered the Saudi consulate in Istanbul on October 2nd, 2018, he was attacked, suffocated and dismembered by a security team of handpicked assassins and medical staff sent from Saudi Arabia in two official aircraft dispatched from Riyadh. All the evidence suggests that this was done on the direction of the Saudi crown prince, Mohammed bin Salman.

It was a meticulously planned, vile murder of a journalist whose only sin was to have become a dissident in the kleptocracy known as the Desert Kingdom.

Almost two years later, we learn that the death sentences imposed on his assassins have now been overturned by another contradiction in terms, a Saudi court of justice. Khashoggi’s sons had apparently been prevailed upon to “pardon” their father’s murderers. Bin Salman (aka MBS) had publicly humiliated the family by summoning them to a photo opportunity to express his condolences. Should it surprise us that the death sentences were commuted? Perhaps MBS did not want to spawn a network of vengeful, would-be assassins among the families of those he has reprieved. Who knows? He had in any event secured the total acquittal of those closest to him involved in the butchery of an innocent man.

US president Donald Trump, as in the recent case of the attempted Russian killing of dissident democratic politician Alexei Navalny, has resolutely refused to condemn those behind the Khashoggi murder, the Saudis or MBS. All his intelligence reports pointed to the direct involvement of MBS.

The White House was warned in 2018 that the Saudis were planning to kidnap Khashoggi from his home near Washington. They had full access to the Turkish audiotapes of the vicious murder in Istanbul. Trump vetoed a resulting congressional ban on arms sales to the Saudis. Jared Kushner, Trump’s son in law, remains on the warmest and closest terms with MBS as they build a de facto alliance between the Arab potentates and Trump’s other buddy Binyamin Netanyahu, the Israeli prime minister on trial for corruption.

World View - The Foreign Affairs Podcast · US election: the race tightens as Trump's "law and order" message makes an impact

Remember, too, that Trump at one time, when he was trying to extract money from the Saudis for weaponry, pointed out that their regime wouldn’t last three weeks without US support. This is the measure of the Trump regime. All ethics are either monetised or ignored. The only imperative is to lie and bully his way back into a further four-year term when heaven knows what would be done once he was freed from the shackles of democratic accountability at the ballot box. His strategy for securing re-election is centred on propagating the foulest untruths about his domestic opponents.

Interesting news during the week was that Smith & Wesson, the small arms manufacturers, have reported a massive boom in domestic sales to US citizens. The company had enjoyed a mini-boom in 2016 when Trump used arms control fears as an electoral prop. Sales slumped towards the end of 2018. But they have more than doubled since the Black Lives Matter protests, rising by 128 per cent in a single quarter.

The world has been warned about the nature of Donald Trump

Far from Making America Great Again (MAGA), we now have MAHA, (Make America Hate Again). The sight of rival militias – black and white – toting assault rifles is scary. And it is exactly what the Trump playbook needs.

The idea that Joe Biden is an existential threat to the American way of life is a grotesque lie. The idea that giving every American some access to decent healthcare is a route to establishing “death committees” as part of big government is another grotesque distortion. But repeat such a lie sufficiently often and it will gain traction. The idea that Trump is a defender of Christianity is absurd but evangelicals still believe it. Along with Roman Catholic bishops.

The recent book published by Mary Trump, the president’s niece, identified one thing – that his own sister, a retired federal judge, believed the president was “cruel”. While it was perhaps a little underhand for Mary Trump to secretly record Maryanne Trump Barry passing that judgment on her brother, it was a telling and undeniable truth. Donald Trump is a cruel sociopath. He is erratic, egotistical, cynical and ruthless. He is devoid of a working moral core and conscience. Even if you discount by half Michael Cohen’s kiss-and-tell account of his doings with Trump, you are still left with a clear picture of a moral monster.

The world has been warned about the nature of the man. We can only hope that there remains in the hearts of sufficiently many decent Americans the elementary Christian impulse towards kindness and aversion to cruelty, cynicism and hatred.

We need to heed the warnings about Trump. He is a danger to humanity precisely because of his cruel nature. Mohammed Bin Salman, Vladimir Putin, President Xi, (the cruel oppressor of Uighurs) and Donald Trump – and all their hangers-on worldwide – are a frightening cohort leading the great states into a dark, amoral valley. We may not deserve better but surely we can hope for better.