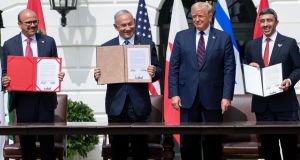 US president Donald Trump hailed a peace agreement between Israel, Bahrain and the United Arab Emirates as “the dawn of a new Middle East”, as he welcomed representatives of all three countries to the White House on Tuesday.

In a development that is likely to be touted by the Trump administration as a major foreign policy win as the US presidential election campaign enters its final seven weeks, Bahrain and the UAE agreed to formally recognise Israel.

The deal, which took shape in recent weeks, was formalised at a signing ceremony in the White House. Known as the Abraham Accords, the agreement will see the signatories open embassies in each other’s countries. Commercial flights have already begun between Israel and the UAE.

“We’re here this afternoon to change the course of history. After decades of division and conflict, we mark the dawn of a new Middle East,” Mr Trump said from a podium on the balcony of the White House . “Thanks to the courage of the leaders present, we take a major stride toward a future in which people of all faiths and backgrounds can live together in peace and prosperity.”

Several members of Congress and Trump supporters attended the ceremony at the South Lawn of the White House, most of them not wearing face masks or exercising social distancing. Among those in attendance was former British prime minister and Middle East envoy Tony Blair.

The agreement signals a realignment of Middle East politics as the two Gulf nations joined Egypt and Jordan in recognising Israel, indicating a deepening alliance between Israel and its Persian Gulf neighbours over Iran. But the absence of the Palestinians from the discussions underlines the scale of the challenge still ahead for the region as it continues to be mired in conflict.

As part of the agreement, Israel agreed not to move forward with plans to annex parts of the West Bank following the formation of the new government in Tel Aviv earlier this summer. But the long-term commitment of Israel to a two-state solution remains unclear.

Mr Trump told reporters as he met with Mr Netanyahu in the Oval Office ahead of the signing ceremony that he expected five more countries to follow Bahrain and the UAE’s lead and recognise Israel. He also predicted that the Palestinians would sign up to an agreement “at the right time”.

“We are talking to the Palestinians,” he said, adding: “Even Bibi gets tired of war,” referring to Mr Netanyahu, who laughed.

The Israeli army said that rockets were fired into Israel from the Gaza Strip while the ceremony was taking place in Washington.

The agreement is the signature achievement of efforts by Mr Trump and his son-in-law Jared Kushner to devise a Middle East peace plan.

In an interview with Fox News on Tuesday morning ahead of the signing ceremony, Mr Trump said he considered ordering the assassination of Syrian president Bashar al-Assad in 2017 but that then defence secretary Jim Mattis opposed it.

“I would’ve rather taken him out. I had him all set. Mattis didn’t want to do it. Mattis was a highly overrated general,” he said of his first defence secretary.

Meanwhile, Democratic presidential candidate Joe Biden headed to Florida on Tuesday amid signs that his support among Hispanics in the state is slipping.

Mr Biden was due to hold a round-table discussion with veterans in Tampa, and attend a Hispanic Heritage Month event later in the evening.

Florida is a must-win state for candidates on November 3rd, with 29 electoral college votes. Mr Trump won the state in 2016.