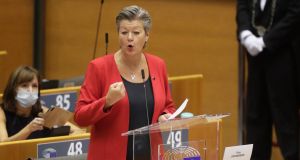 New proposals for a common European Union system for managing migration will have a “strong focus” on deporting people who are refused asylum, the EU home affairs commissioner Ylva Johansson has said.

“We will focus very much on returns,” the Swedish commissioner told journalists. “When a person has been living in a country for years before they got the return decision, it’s very difficult to return them. They’ve had time to fall in love, being part of society ... So a quicker process [is needed], and my aim is that a negative asylum decision will come together with a return decision.”

Ms Johansson noted that the number of people arriving in the EU through irregular routes had decreased since the peak about five years ago, but that “we have a lot of people coming that are not entitled to international protection, and need to be returned”.

Attempts to agree a common EU system to manage migration have foundered since 2016, when a deal to pay Turkey to hold back those crossing into the bloc bought time and took the pressure off political leaders.

But a fire that ripped through the crowded Moria camp on the Greek island of Lesbos last week and left 12,000 people – mostly from Afghanistan, Syria and various African countries – without shelter, sanitation, food or water has highlighted the dire conditions on Europe’s borders and increased momentum to find solutions.

Following consultation with national governments, stakeholders and political factions, the commission is to release new proposals for migration policy next week, which will then be considered for approval by member states.

“The result is that nobody will be satisfied,” Ms Johansson predicted. ”Everybody will realise that this is a balanced compromise.”

The plans will involve preserving but amending the Dublin regulation, under which migrants must make a claim for asylum in the first EU country they arrive in – a rule that border states such as Greece and Italy complain places an excessive burden on them.

But it should be “mandatory” for member countries to contribute to help border states, “according to their size and capability”, Ms Johansson said.

The idea of member states committing to accept a quota of refugees, which she described as “very divisive”, is no longer on the table. Neither is a past proposal to house people in camps outside the EU while their asylum claims are processed.

A better way was to continue to co-ordinate with the United Nations refugee agency to identify refugees, and fly them directly into the EU “so they do not have to pay smugglers, risk their lives”, Ms Johansson said. “Orderly, met at the airport.”

While emergency camps such as those on the Greek island should not exist, properly run reception centres should be part of the system, she added. But they should have time limits for residency – an issue on which Ireland has a very poor record in its direct provision system compared with fellow member states.

“We shall have no more Morias. We should not have that kind of camps,” Ms Johansson said. “We need reception centres, and they need to be managed properly. And we also need clear time limits for how long people can be in reception centres.”