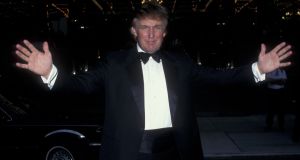 Donald Trump at the Trump International grand opening in New York in May 1997. Photograph: Ron Galella Collection via Getty Images

A former model has come forward to accuse US president Donald Trump of sexually assaulting her at the US Open tennis tournament more than two decades ago, in an alleged incident that left her feeling “sick” and “violated”.

In an exclusive interview with the Guardian, Amy Dorris alleged that Trump accosted her outside the bathroom in his VIP box at the tournament in New York on September 5th, 1997.

Ms Dorris, who was 24 at the time, accuses Mr Trump of forcing his tongue down her throat, assaulting her all over her body and holding her in a grip she was unable to escape from.

“He just shoved his tongue down my throat and I was pushing him off. And then that’s when his grip became tighter and his hands were very gropey and all over my butt, my breasts, my back, everything.

“I was in his grip, and I couldn’t get out of it,” she said, adding: “I don’t know what you call that when you’re sticking your tongue just down someone’s throat. But I pushed it out with my teeth. I was pushing it. And I think I might have hurt his tongue.”

Via his lawyers, Mr Trump denied in the strongest possible terms having ever harassed, abused or behaved improperly toward Ms Dorris.

Ms Dorris, who lives in Florida, provided the Guardian with evidence to support her account of her encounters with Mr Trump, including her ticket to the US Open and six photos showing her with the real estate magnate over several days in New York. Mr Trump was 51 at the time and married to his second wife, Marla Maples.

Her account was also corroborated by several people she confided in about the incident. They include a friend in New York and Ms Dorris’s mother, both of whom she called immediately after the alleged incident, as well as a therapist and friends she spoke to in the years since. All said Ms Dorris had shared with them details of the alleged incident that matched what she later told the Guardian.

Ms Dorris, now 48 and a mother to twin daughters, said she had considered speaking publicly about the incident in 2016, when several women made public similar accusations against the then Republican candidate for president. But she decided against coming forward, in part because she thought that doing so might harm her family.

“Now I feel like my girls are about to turn 13 years old and I want them to know that you don’t let anybody do anything to you that you don’t want,” she said. “And I’d rather be a role model. I want them to see that I didn’t stay quiet, that I stood up to somebody who did something that was unacceptable.”

Ms Dorris said she spent several days with Mr Trump in September 1997 after being taken to New York for a long weekend by her then boyfriend, Jason Binn. At the time, Ms Dorris was living with friends in Boca Raton, Florida, regularly travelling to Miami for modelling and occasional acting work. Mr Binn, the founder of several luxury fashion and lifestyle magazines, was a friend of Mr Trump; in 1999, he reportedly described the real estate businessman as his “best friend”.

On Friday, September 5th, Ms Dorris said Mr Binn took her to meet Mr Trump at his office in Trump Tower in Midtown Manhattan, before they went together to the US Open in Queens.

“He came on very strong right away,” Ms Dorris said of Mr Trump. “It seemed typical of a certain guy, people who just feel like they’re entitled to do what they want . . . even though I was there with my boyfriend.”

The couple were joined by other friends of Mr Trump in his private box, a luxury carpeted suite that had a balcony overlooking the court. Photos from the day show Ms Dorris alongside Mr Trump and his friend Marylou Whitney.

Ms Dorris said the alleged assault occurred when she got up to go to the bathroom, which was hidden behind a partition wall just metres from where Mr Trump’s guests were watching the tennis. “I was having some issues with my contact lenses,” she said. “I remember going in there to moisten my lens.”

When she came out, she alleges, Mr Trump was waiting outside. “Initially I thought that he was waiting to go to the bathroom, but that wasn’t the case, unfortunately,” she said. She alleges Mr Trump forced himself on her after a brief exchange in which she recalls nervously laughing and telling him: “No, get away.”

She alleged she told Mr Trump “no, please stop” but “he didn’t care”. “It doesn’t matter who you are,” she said. “Any time anyone says no, no means no. And that just didn’t work out for me. It wasn’t enough.”

“I just kind of was in shock,” she added. “I felt violated, obviously. But I still wasn’t processing it and just was trying to go back to talking to everyone and having a good time because, I don’t know, I felt pressured to be that way.”

Ms Dorris cannot recall if she told Mr Binn the full details of the alleged assault, but she says she asked him to tell Mr Trump to leave her alone. She said she told Mr Binn: “He’s all over me. I can’t deal with this. You have to do something.”

Mr Binn did not respond to a request for comment. However, according to Mr Trump’s lawyers, Mr Binn told them he had no recollection of Ms Dorris telling him that anything inappropriate had happened with Mr Trump or that she felt uncomfortable around him.

Ms Dorris said that soon after the alleged incident, she phoned a friend who lived in the city and told them what had happened. “I think I just felt safe knowing that I had someone in New York that I could go to, God forbid it got worse,” she said.

She said Mr Trump did not seriously assault her again during her stay in New York, but that he continued to pursue her despite her firm rejection of his advances.

The day after the alleged assault, Ms Dorris and Mr Binn returned to Mr Trump’s box at the US Open. Ms Dorris said she decided to wear a “conservative” outfit of khakis, a blue knit sweater and loafers in an effort to discourage further advances from Mr Trump.

The couple stopped off at Mr Trump’s apartment in Trump Tower on the way, where they posed for photographs with celebrities who were also visiting the real estate tycoon before attending the tennis, including the musicians Lenny Kravitz and Sean Combs, AKA Puff Daddy.

Ms Dorris said Mr Trump continued to pursue her, asking questions such as: “Could you see yourself living here?” “It didn’t matter that I changed my clothes, it was still the same situation,” she said. “I didn’t feel like myself that second day at all. It did feel like something was taken away.”

Later they were joined in Mr Trump’s box by more VIP guests, including Leonardo DiCaprio and the illusionist David Blaine, with whom they posed for photographs. DiCaprio, Blaine, Kravitz and Combs did not respond to requests for comment.

Asked why she continued to spend time with Mr Binn and Mr Trump in the days after the alleged assault, Ms Dorris said: “I was there from Florida and I was with Jason. I had no money, nowhere to go. We were going from event to event and it was overwhelming.”

She did not fully process what had happened until later, she added. “People spend years around people who have abused them, that’s what happens when something traumatic happens, you freeze.”

Lawyers for Mr Trump said Ms Dorris’s version of events did not stand up to any scrutiny and had there been any inappropriate behaviour by Mr Trump outside of the bathroom within the VIP box, there would have been numerous witnesses.

Mr Trump’s lawyers said it seemed incredible that Ms Dorris would voluntarily choose to be in the vicinity of Mr Trump, at the US Open and the Versace memorial, in the days following the alleged assault. They said Mr Binn had raised similar questions about her account. Mr Trump’s lawyers also questioned why Ms Dorris sat next to Mr Trump at the Versace memorial, when she could have sat the other side of Mr Binn.

They said Ms Dorris had never raised the allegations with a law enforcement agency or to Mr Trump, and said the timing of the claims so close to the November presidential election suggested they might be politically motivated.

The Guardian first heard about Ms Dorris’s accusation against Mr Trump via a model agent she had worked with in Chicago, in whom she had confided. Ms Dorris first shared her allegation in confidence 15 months ago, but was unsure about going public. She recently decided she was ready to take that step, in part to be a role model to her daughters, who are now in their teens.

“When you invade someone’s space, it doesn’t matter if you were raped, it’s sexual assault, and it’s not okay,” she said. “You don’t touch someone unless they want to be touched. And I did nothing to encourage him to touch me.”

Ms Dorris said she was also frustrated to hear Mr Trump’s many other accusers being accused themselves of lying. “I’m sick of him getting away with this,” she said. “I’m tired of being quiet. It’s kind of cathartic. I just want to get this out. And I want people to know that this is the man, this is our president. This is the kind of thing he does and it’s unacceptable.” – Guardian