Trump announces plan to move US embassy to Jerusalem 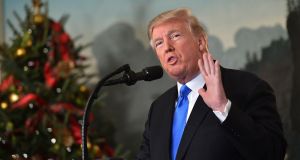 US president Donald Trump delivers a statement on Jerusalem from the Diplomatic Reception Room of the White House in Washington, DC. Photograph: Mandel Ngan/AFP/Getty Images

US president Donald Trump has officially recognised Jerusalem as the capital of Israel and said the US embassy would be relocated from Tel Aviv to the city.

He said he was ordering the state department to develop a plan to relocate the embassy. However, the president signed a waiver that delays the move for six months.

He said Israel had a right to determine its own capital and delaying recognition of Jerusalem as the capital had done nothing to achieve peace.

Mr Trump said the decision “marks the beginning of a new approach to conflict between Israel and the Palestinians”.

The status of Jerusalem – home to sites holy to the Muslim, Jewish and Christian religions – has been one of the thorniest issues in long-running Mideast peace efforts.

Israel considers the city its eternal and indivisible capital and wants all embassies based there. Palestinians want the capital of an independent Palestinian state to be in the city’s eastern sector.

Earlier, a senior US official said: “[Trump] views this as a recognition of reality – both historic reality that Jerusalem has been the capital of the Jewish people and the Jewish faith since ancient times,” adding that in “modern reality . . . it has been the seat of government, important ministries, its legislature, the Supreme court.”

The official said the announcement “fulfills a major campaign promise that had been made by a number of previous presidential candidates, and enjoys broad bipartisan support in Congress. ”

Officials conceded the actual process of relocating the embassy could take several years. “It is a practical impossibility to move the embassy tomorrow,” one official said.

The Arab League is to hold an emergency meeting on Saturday to discuss the decision, the head of the Palestinian delegation to the body said on Wednesday.

The Palestinians and Jordan had requested the meeting which will take place at 3pm (1pm Irish time), ambassador Diab al-Louh told Reuters.

The announcement marks a dramatic shift in US foreign policy towards the Middle East.

While Congress in 1995 passed a Bill calling for the embassy to be relocated to Jerusalem, successive US presidents have signed a waiver every six months allowing the embassy to remain in Tel Aviv.

Mr Trump informed the leader of the Palestinian Authority, Mahmoud Abbas, and other Muslim leaders of his intention to move the embassy in a series of phone calls on Tuesday.

Mr Abbas’s spokesman said the Palestinian leader warned the president of the “dangerous consequences such a decision would have to the peace process and to the peace, security and stability of the region and of the world.”

Turkey also warned Washington that the issue was a “red line” for Muslim countries.

Later in the day, several Palestinian groups called for three days of “popular anger” to protest against Mr Trump’s move.

During a phone call with Mr Trump he said that Jerusalem’s status had to be dealt with in the framework of peace negotiations “with the aim in particular to establish two countries, Israel and Palestine, living in peace and security side by side with Jerusalem as capital,” his spokesman said.

The EU’s foreign policy chief Federica Mogherini, speaking alongside secretary of state Rex Tillerson during a visit to Brussels, said that “any action that would undermine” peace efforts to create two separate states for the Israelis and the Palestinians “must absolutely be avoided.”

Mr Trump sparked international concern in the early weeks of his presidency when he appeared to question the necessity of a two-state solution to the Israeli-Palestinian issue, a bedrock of the international policy on the Middle East for decades.

Senior administration officials however said that Mr Trump was still committed to the two-state solution if both sides were in agreement.