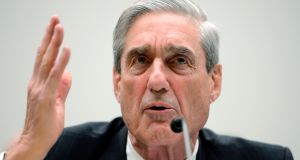 Amid signs that the special investigation into Russian interference in the US election and potential collusion by the Trump campaign team is continuing apace, various media outlets reported that Deutsche Bank had handed over data to the special counsel.

German newspaper Handelsblatt was the first to report that Mr Mueller had ordered the bank to hand over account information related to Mr Trump.

Deutsche Bank was one of Mr Trump’s top lenders for decades while he built his real-estate empire, continuing to extend credit to the future president after his bankruptcy.

The German bank faced similar calls by Democrats in Congress to hand over records earlier this year, but refused to do so.

But the White House disputed that a subpoena had been issued.

“We have confirmed that the news reports that the special counsel had subpoenaed financial records relating to the president are false,” Mr Trump’s lawyer Jay Sekulow said in a statement. “No subpoena has been issued or received. We have confirmed this with the bank and other sources.”

Speaking to reporters in the White House yesterday, press secretary Sarah Huckabee Sanders echoed Mr Sekulow’s comments, adding that the media “got out ahead of their skis a little bit in pushing and driving this story”.

The reported development comes days after Mike Flynn, Mr Trump’s former national security adviser, pleaded guilty about misleading the FBI about the nature of his conversations with Russian ambassador Sergei Kislyak in December.

Mr Trump has faced intense scrutiny in recent days after he appeared to suggest in a tweet on Saturday that he knew Mr Flynn had lied to the FBI and that that was why he fired him in February. Such an admission could suggest the president sought to obstruct justice when he asked FBI director James Comey to lay off Flynn according to an account of a conversation between the two men in February by Mr Comey.

Mr Trump’s lawyer John Dowd said on Sunday he had drafted the contentious tweet for the president on Saturday.

Meanwhile yesterday, the longest-serving member of Congress, John Conyers, became the latest man to lose his job in as the wave of sexual harassment allegations that have engulfed American political and cultural life since the Harvey Weinstein scandal continued.

Mr Conyers (88) told a local radio station in Missouri that he was retiring with immediate effect, and endorsed his son as his successor.

Mr Conyers, a founding member of the Black Caucus in Congress, faced a number of allegations of sexually inappropriate behaviour by former staff members and was also revealed to have made a financial settlement with a staffer over his sexual behaviour. Mr Conyers said his legacy would not be “compromised or diminished in any way by what we are going through now,” saying the issue “shall pass”.